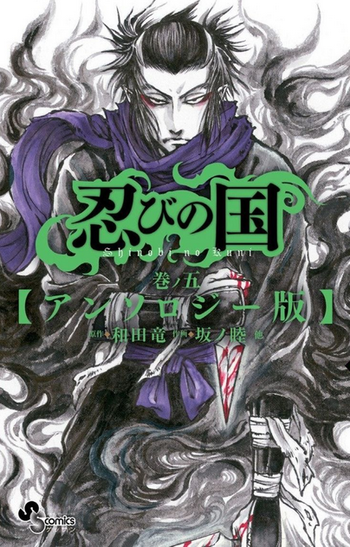 Shinobi no Kuni (忍びの国; Land of Ninja) is a Historical Fiction novel written by Ryou Wada. Its manga adaptation was illustrated by Matsumi Banno.

Set in the 4th year of Tenshou Era during the Warring States Period (around 1567) of Japan, it tells a dramatized version of the Battle of Murayama, between the Oda clan and the Ninja of Iga province.

The story features an ensemble cast of questionable sanity and morality drawn together in a conflict of politics and ideologies: a young ninja disillusioned by his people's way of living, his lazy nemesis secretly struggling to maintain his love-life, and a bunch of sly politicians with hidden agendas.

Tropes used in Shinobi no Kuni: