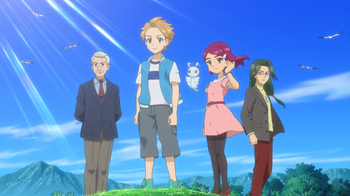 The Cambria Project team (as of season 1).
Advertisement:

Pikaia! is an Edutainment anime series from 2015, co-produced by Production I.G and OLM Incorporated. It got a second season in 2017, the title only changing by adding a second exclamation point. Both seasons consist of 15 minute episodes, which are split into about 11 minutes of plot and 4 minutes of lecture.

The story is set in the future, when the earth has become uninhabitable, forcing humans to live in space colonies.Two 14-year-olds, Vince and Hanna, become investigators for the Cambria Project, led by Professor Parker (based off a real-life scientist.) Their mission is to travel back to the Cambrian Period and investigate the creatures of that time, in order to find those who possess the Lost Codes. This DNA information may be the key to making the earth fit to sustain human life again.