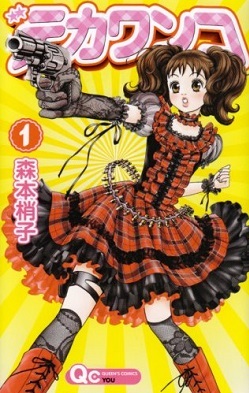 Deka Wanko is a comedy josei manga series by Kozueko Morimoto (the author of Gokusen) which started to be serialized in 2008. It was adapted into a live-action drama in 2011.

Ichiko Hanamori (nicknamed "Wanko" by her peers, which means "puppy") is a mystery to the rest of the members of Police Headquarters 1st Division, Crime Enforcement Squad 6. She's ditzy, not too bright, and has strange habits: Not only does she dress in Elegant Gothic Lolita fashion, but she's constantly sniffing around. Literally. Who on Earth made her a police detective?

As it turns out, Wanko's sense of smell is akin to that of a dog's. That's how she's able to solve crimes: by sniffing the ground, sniffing the suspects, and sniffing the air. However, as gifted as she is, she's still a rookie, so she needs someone to train her, which results in a game of who can push her off to someone else the fastest. Hot-Blooded detective Kirishima, who was asleep during the decision-making, ends up with her.