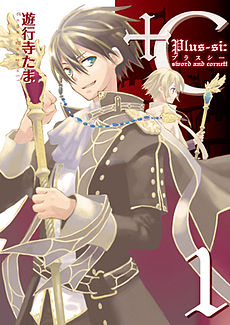 +C: Sword and Cornett (also known as Plus-Si) is a Josei manga by Tama Yugyoji, which ran in Monthly Comic Zero Sum from 2008 to 2012. The story about a young man named Belca Noctircus, who is the third prince and the bastard son of a dancer and the king, and the conspiracy against him and the rest of the royal family.

It begins when his older brother, the Crown Prince Hector, returns to the capital of Azelprade and an incident occurs after a brief spat with the Council of Elders. Somewhat against his own will, Belca investigates the incident along with his older brother, the second prince Orcelito, and winds up falling off a cliff thanks to a man named Kiliko Lagen. He's found and nursed back to health by a mysterious bard named Eco, and together the two of them search out the truth that Eco's very, very sure Belca is nearly beside, meeting friends and foes alike along the way.