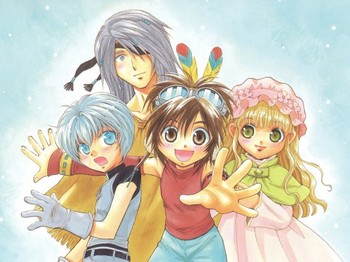 +Anima is a manga series written and drawn by Natsumi Mukai. It was serialized in Dengeki Comic Gao from 2001 to 2005, and was licensed in North America by Tokyopop.

Beings who possess animal-like powers walk among humans in this alternate universe. These mysterious mutants, the +Anima, are shunned by society. Four outcasts in particular - Cooro, a boy with crow-like powers; Husky, a fish-boy; Senri, a bear +Anima; and a girl named Nana, who wields the power of the bat - search for others like themselves while trying to gain acceptance in a world cruel to anyone or anything that is different.