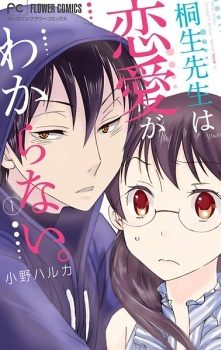 Kiryuu Futaba is a 32-year-old mangaka who finally found success with her harem romcom Bocchi no Ore kara Riaju no Omaera ni Ittoku ("A Loner Like Me's Got a Lot to Say about You Normies out There") or Bottoku for short. In just a year, the series got popular enough to get an anime adaptation! Problem is… her favored genre is fantasy shonen touching on social issues. But because all of her previous works flopped, she accepted her editor's challenge to tackle a more popular genre, even though she hates harem comedies and knows nothing about love.

To make matters worse, her 20-year-old assistant Asakura "Assassin" Yuu, soon confesses his feelings for her. And Kitamura "Strategist" Kyousuke (42), the screenwriter for the anime adaptation, also actively tries to seduce her. At first highly uncomfortable with those attentions, Futaba eventually decides to seize this occasion to understand more about this whole "love" thing that's so alien to her.

Kiryuu-sensei wa Ren'ai ga Wakaranai (Kiryuu-sensei Doesn't Understand Love) is a not-quite-romantic comedy by Ono Haruka, published in the josei magazine Ura Sunday in 2016. It is one of the few mangas that tackle the subject of asexuality and aromanticism, as well as providing some commentary on stiffening gender expectations and some insight on the manga publishing world. The series' messages aren't exactly subtle, but that's to be expected considering the rarity of its main topic. All 5 volumes were released in France by Akata under the title Aromantic (Love) Story.