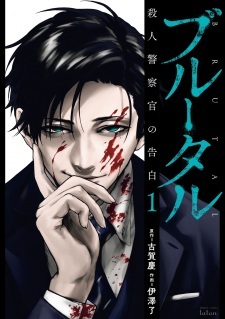 Dexter of the Rising Sun
Advertisement:

Brutal: Satsujin Keisatsukan no Kokuhaku (ブルータル 殺人警察官の告白, lit. Brutal: Confessions of a Homicide Investigator) is a crime thriller manga with story by Kei Koga and art by Ryou Izawa. The manga began serialization in the josei magazine Comic Tatan in 2019. It's a spinoff manga of Trace: Kasouken Houi Kenkyuuin no Tsuisou (トレース 科捜研法医研究員の追想 lit. Trace: Recollections of a Forensic Researcher) which is also written and drawn by Kei Koga.

The manga follows Hiroki Dan, a handsome and successful young detective that is the star of the police department. Off-duty, however, he is a Serial Killer that takes it upon himself to bring bloody retribution to people that the law can't punish properly.