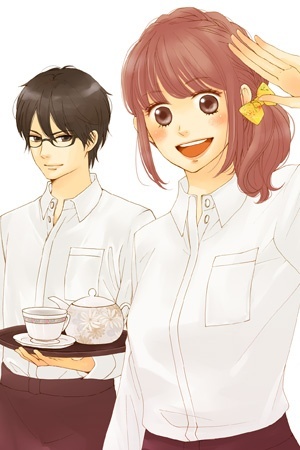 Michiko Shibata is almost 30 years old... yet she doesn't have her life sorted out in the slightest. The company she worked in was shut down, she's rejected at all her job interviews due to having little to no studies nor experience, and her cute university student boyfriend has taken most of her money through gifts and loans. And it's been forever since she last ate meat. On the way to bankruptcy, she encounters her former boss Kurosawa, a cross and rude man who has turned down a successful business career to take over his grandmother's café. Although she hates him to death, she's forced to accept his offer to work on the café, under the promise of receiving meals (including meat!) every day.

As it turns out, Kurosawa isn't such a terrible person as Michiko thought him to be.

Dame na Watashi ni Koisite Kudasai (lit. Please Love the Useless Me) is a josei manga by Aya Nakahara, the author of the popular Lovely Complex. It's been serialized in the monthly magazine You since 2013, and compiled into 6 volumes so far. The series has been greenlighted for a live-action drama version that'll air in 2016.