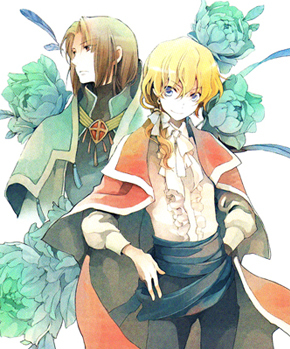 What do you want to know?
Advertisement:

Aruosumente (The Sage's Dream) is a Josei manga created by Aki, which started serialization in January of 2010.

It tells the story of Legna, nicknamed Angel, one of the last members of a clan of dream seers, so-called Oracles, in the service of the royal family and responsible for His Majesty's safety.

One night, Legna dreams of an overpowering killing intent presumably aimed at the young Emperor Artian, but finds himself unable to sense its source. Determined to fulfill his duty as Oracle, Legna decides to enact the rumored Aruosumente (Sage's Dream) ritual, but finds that he has to pass a trial in order to obtain the desired answer.

However, to do so, he has to first disentangle court intrigues reaching back to his own father's death ten years ago.