Manga / You're My Pet 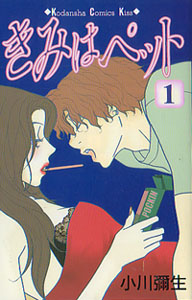 You're My Pet (Kimi wa Petto) is a 14-volume Josei manga series by Yayoi Ogawa detailing the life of Sumire Iwaya, a journalist and career woman.

Sumire has worked hard to get where she is: an 'elite', a successful career woman with degrees from Tokyo University and Harvard, self-sufficient, competent and reliable. Unfortunately, although she's very attractive, she's also taller than most of the men she knows, which results in her boyfriend of five years leaving her for his mistress, saying she's too intimidating. Sick of putting up with male inferiority complexes about her success, Sumire decides that from now on, she'll only date men who have the 'three highs' (height, education, salary). Thankfully, an old flame from university, Shigehito Hasumi, has just that.

Hasumi is Sumire's first love. Dating him brings her right back to the insecure, shy woman she was in university. She can't tell him her true feelings on anything and their relationship stays fairly formal even after they start having sex. Sumire spends the next two years trying to build a relationship with Hasumi, but the two are constantly thwarted by Shiori Fukushima, who wants Hasumi for herself, their own hectic careers (which includes a transfer to Hong Kong for Hasumi), and... Momo.

Momo is a homeless teenager Sumire finds injured in a cardboard box outside her condo. She takes him in and feeds him. When Momo begs to stay, Sumire relents, but on one condition - he live as her pet. She is shocked and disappointed when he agrees, but grudgingly keeps her word. She soon discovers that Momo has no 'male pride'; despite being much shorter than her, having no book education to speak of, and being completely broke, Momo is happy to live with Sumire and accepts her exactly as she is. Sumire soon finds that the only person she can express all her fear and insecurities to is Momo.

The manga came to an end in 2005. A ten-episode live-action series was produced in 2003. The series examines the dilemma of Family Versus Career and Being True To Yourself, and comes with a lovely Happily Ever After ending.

The manga is currently being published in English by Kodansha; it was previously published by Tokyopop under the title Tramps Like Us.