Manga / The High School Life of a Fudanshi 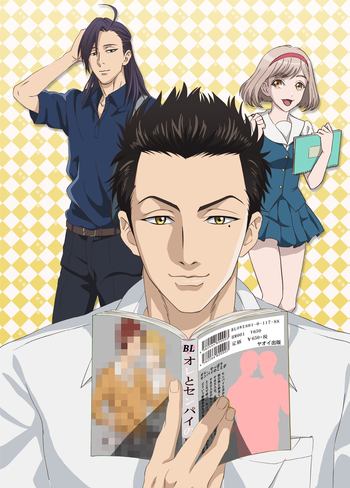 The High School Life of a Fudanshi (腐男子高校生活 Fudanshi Kōkō Seikatsu) is a comedy yonkoma manga by Atami Michinoku, which was serialized in Zero Sum Online from 2015 to 2018. The manga is licensed in English by Seven Seas Entertainment. It received its own 12-Episode Anime in 2016.
Advertisement:

Ryo Sakaguchi has a deep, dark secret: he’s a fudanshi―a straight boy obsessed with Boys' Love (BL), the genre of stories revolving around the romance between two men. While he has trouble understanding how others don’t find the same bliss he does from his unusual hobbies, that doesn’t make it any easier for Ryo to buy his precious manga from the “girls” section of the store, or any simpler, explaining the world of boys’ love, shipping wars, and doujinshi circles to his best friend Nakamura. Will Ryo find other fanboys to share his hobby with, or is he doomed to sit alone on his throne of BL romance?

The High School Life of a Fudanshi provides examples of: