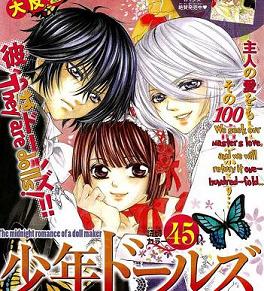 Shounen Dolls ("Boy Dolls") is a shoujo manga by Wataru Hibiki, which was serialized in LaLa DX from 2008 to 2011 and compiled into four volumes.

The Etou family is a line of doll makers with two very special gifts: first, the ability to communicate with dolls; and second, through the help of two guardian dolls, the ability to "purify" dolls who go beserk from loneliness. These guardian dolls, western-style Leonardo Angel Silvereye and his Japanese counterpart, Yuki, come alive through the master's "proof of affection", a kiss; and they are passed down from family head to family head.

Sixteen-year-old Ageha inherited the dolls very early in life and accidentally lost Yuki a few years ago, in the confusion resulting from her parents' deaths; since then, Ageha and Leo have been searching for her. However, if life with bratty, arrogant and self-centered Leo was already lively, it becomes even more so once the elegant, refined, and always-helpful Yuki is found; opposing personalities and the craving for attention that all dolls possess is sure to cause plenty of excitement.