The characters of the anime and manga series Shugo Chara!. Please help with the blurbs!

General Tropes
The Guardians are the student council of Seiyo Elementary School, whose task, aside from protecting and representing the general student population, is to preserve the Heart's Eggs of said children, and personages within general. They are also tasked with hunting for the Embryo (Due to Tadase's ideas towards creating himself as the world's king.), the legendary wish-granting Egg, which of course pits them against the Easter Company. It is primarily composed of four positions: the King's Chair, the Queen's Chair, the Jack's Chair, the Ace's Chair, and the occasional Joker's Chair, only taken via one with three Chara. Each of the members has a Guardian Character that represents an aspect of the person they want to be, which grants them special powers when they need it.

The Guardians were founded by Tsukasa, making the current ones the second generation of Guardians.

"We are all the main characters of our own stories!"

The main protagonist. Everybody sees Amu Hinamori as a "Cool and Spicy" girl. In reality, however, she's really just a clumsy girl who really has no clue, like the majority of the student population. This changes, however, when she wakes up to find three eggs, each containing a different Character Change, aka an aspect of the personality she wants to be: Ran (Amulet Heart) makes her outgoing and athletic, Miki (Amulet Spade) makes her cool and artistic, and Suu (Amulet Clover) makes her sweet and domestic. When the Guardians, the school's student council, finds out about this, they invite her into their circle — because she, with three Guardian Characters, has the perfect qualifications for the Joker's Chair.

"I'm sorry, but there's already someone I like."
"YOU DARE CALL ME A PRINCE!?"

The current King of the Guardians; polite, smiling Tadase couldn't be any more popular with the ladies (although he could care less). By the first day of school, even Amu has a crush on him, leading her to confess (however she was turned down, as he already liked someone - ...his dog.) His Guardian character, Kiseki, was born from his desire to grow stronger - but of course, in true Shugo Chara! fashion, this translates to having Kiseki's dream being to Take Over the World.

to see him as Nadeshiko

"Could you please keep this secret from the others a while longer?"

Nadeshiko is introduced as the beautiful, charismatic Queen's Chair of the Guardians, who openly befriends Amu and was the one who constantly attempted to get her to join. Nadeshiko succeeded, of course, and soon became one of Amu's best friends and one of the few people she'd confide in. A bit later on, though, Nadeshiko abruptly leaves to study dancing in Europe: much to Amu's sadness and disappointment when she left without saying goodbye. Her place as the Queen's Chair was filled by Rima. Nadeshiko comes back later on, though, although with some curious reveals that he isn't quite the what "she" seemed at first.

"It's been a while since we did it. Let's go, special training!"

One year senior to Amu, upbeat, energetic Kukai was the Jack's Chair during Amu's first year as a Guardian. He adores sports, as seen by his Guardian Character Daichi. He graduates by the end of the year, moving up to middle school, telling the Guardians that he's just at the other end of the school. He occasionally drops by to check in on them and to see how things are going. During her beginning years as a Guardian, Amu viewed Kukai as almost like an older brother.

"Hey, why is everyone so sad? I'm the baby here and the only one allowed to cry!"

The current Ace's Chair, Yaya is one year Amu's junior and is seen as hyperactive, childish and immature - however, this is only because of her desire to remain a baby forever because she felt that her parents were ignoring her in favor of her baby brother (as seen by her Guardian Character, Pepe). She is also a good, albeit rather clumsy, ballerina.

"Teacher, there's nothing funny, so why would I smile?

A New Transfer Student who replaces Nadeshiko as the Queen's Chair. This earns her a warm reception from the boys in school (while the girls are annoyed by her arrogance), resulting in an Instant Fan Club because of her beauty. Beautiful as she is, however, Rima's got her own insecurities. However, it did, when combined with her liking for comedy, help create her Chara Kusukusu.

Kairi becomes the new Jack's Chair after Kukai graduates. He is very serious, strict and organized, and he tends to ensure that the Guardians get their tasks done. His Chara is a samurai, Musashi.

Rikka is a Guardian Apprentice who appears in Shugo Chara!! Dokki Doki.

Although introduced as an Easter employee, it is pretty clear from the beginning that Ikuto doesn't care about their plans. If he does find the Embryo, he plans to use it for his own purposes — to free himself from the control of his current employers. When not trying to find the Embryo, he can generally be seen romantically teasing or just plain screwing with Amu. Has a lot of annoyances. Kazuomi never helped at all.

A junior high student model turned singing idol. She is actually Ikuto's younger sister. Utau had tried to find the Embryo to release her brother from Easter, but she never succeeded. Utau is very attracted to Ikuto and becomes extremely jealous of Amu because Ikuto shows an interest in her.

A former employee member of Easter. In order to find the Embryo, he joined Seiyo Elementary and became in charge of Amu's class in the disguise of a clumsy and kind-hearted teacher.

A former employee of Easter Company, Kairi Sanjo's older sister, and Utau's manager. She came up with a new project, Black Diamond, to find the Embryo and mass-produce X Eggs.

The managing director of Easter company, a middle-aged man who is also the stepfather of Ikuto and Utau, and the former superior of Nikaidou and Yukari. 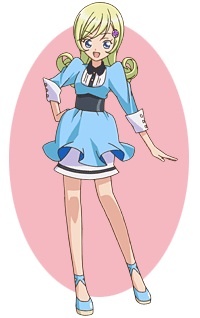 "Just do everything ya wanna do!"

The new Easter Company worker who has the ability to turn Heart's Eggs into ? Eggs and has a hobby of making ruby necklace jewelries which she puts around the necks of her victims.

The true head of Easter Company.

General Tropes
Tiny fairies who hatch from a person's Heart's Egg. They are chibified personifications of their chosen person's personality traits, wishes, and dreams, and they have magical powers of their own. Fusing with them induces a transformation into a Magical Girl (or Boy) and gives the chosen person special abilities.
Ran 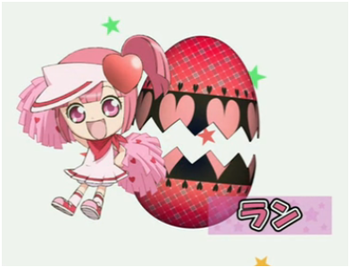 The first to hatch from Amu's eggs. Ran represents Amu's desire to be more honest, confident and athletic. 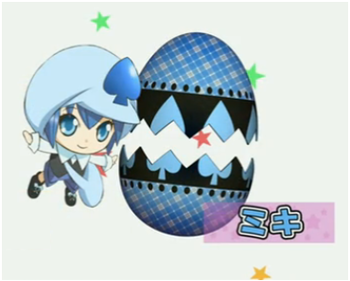 The second to hatch from Amu's eggs. Miki represents Amu's desire to be more sharp, level headed, and artistic. 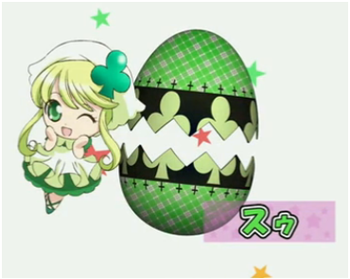 The third to hatch from Amu's eggs. Suu represents Amu's desire to be more caring, sensitive and improve her domestic skills. 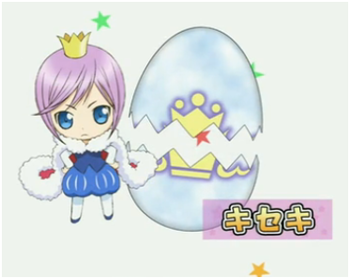 Tadase's Guardian Character. Kiseki was born for a combination of Tadase's desire to be stronger and the dream of world domination. 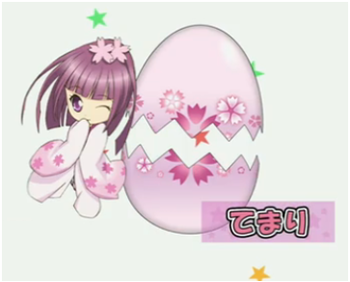 Nadeshiko's first Guardian Character. Temari appears to be elegant and Nadeshiko's desire to be more mannered and become a Japanese dancer. 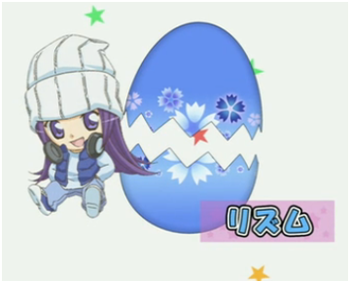 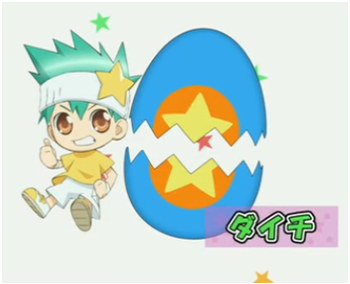 Kukai's Guardian Character. He was born when Kukai wanted to do many sports but had to choose. 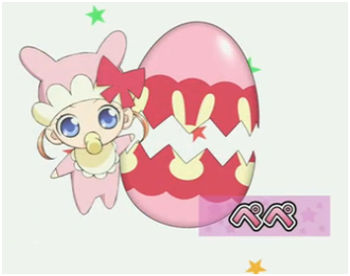 Yaya's baby-like Guardian Character who was born from Yaya's desire to remain baby-like in nature. 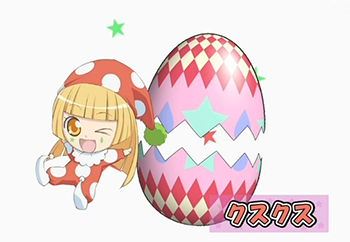 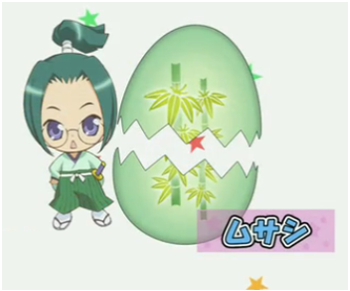 Kairi's Guardian Character created from his desire to become a samurai and protect the weak. 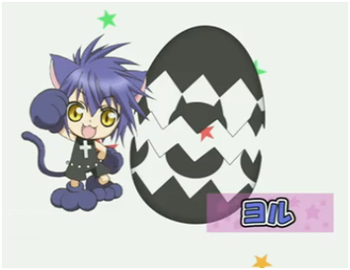 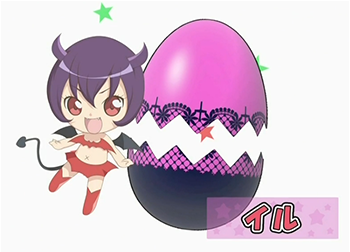 The first of Utau's two Character Guardians introduced in the story. She has a devilish look and represents Utau's energetic and playful side. 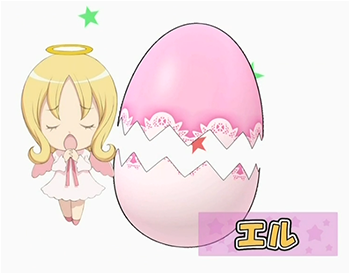 Utau's second Guardian Character and is the complete angelic opposite of Il. 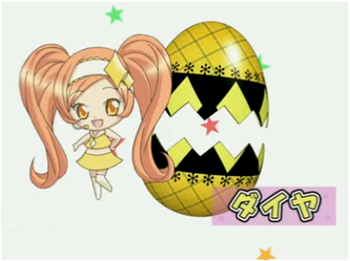 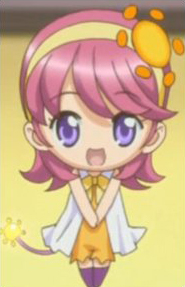 Rikka's Guardian Character. Rikka gave birth to her egg in Shugo Chara!!! Dokki Doki episode 15. Before she hatched, Rikka felt lost of herself which subsequently turned her egg into an X-Egg, but it was purified very soon. Hotaru is polite and elegant, balancing out Rikka's energy and spunk. 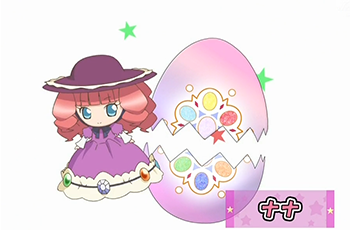 Lulu's Guardian Character. She represents Lulu's desire to try many things and her specialty is making jewelry.