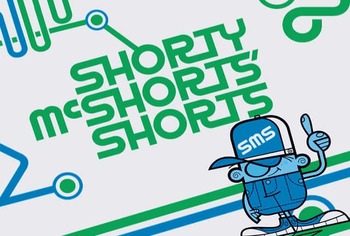 In 1995, Cartoon Network gave us the What A Cartoon! Show. This gave us many animated shorts. Three years later, Nickelodeon would grant viewers Oh Yeah! Cartoons. This gave us even more animated shorts. However, it would take take until the mid-2000s for the third major player in United States children's television to deliver their own version of the cartoon showcase. But while this would also gift us with animated shorts, Disney's stint at it was a little short as well.

Shorty McShorts' Shorts was a short-lived Animated Anthology series that aired on Disney Channel from 2006-2007. The show was "hosted" (i.e., he appeared in the opening sequence

and nothing more) by the titular Shorty McShorts, a short, blue man who serves as a train conductor on a subway known as the "Short Line." In contrast to the previously mentioned What A Cartoon! and Oh Yeah! Cartoons, which were half-hour Three Shorts programs, each episode of Shorty McShorts' Shorts was a three-to-five minute long animated short that would air between other Disney Channel programming. Only thirteen shorts were produced over show's two short seasons. These include:

Did we say "short" enough yet?