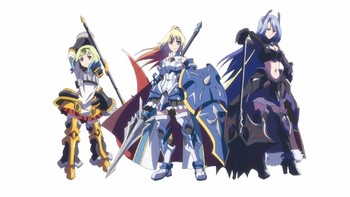 DMM Games and Level-5 have announced Soukou Musume (Armored Girls), a new simulation RPG based on Level-5’s Danball Senki license planned for release across PC browser this winter in Japan, followed by iOS and Android in spring 2018.

The game features “countless beautiful girls” wearing the parts of Little Battler eXperience (LBX) robots. While mainly centered around five girls, a total of 60 characters are planned to appear. Additionally, there is an armor destruction system in which girls’ LBX parts will be destroyed when attacked, exposing their skin. http://gematsu.com/2017/09/dmm-games-level-5-announce-little-battlers-experience-based-armored-girls-pc-browser-ios-android#yzJ6QMU5gdX1P0dL.99

Sōkō Musume itself is planned as a multimedia franchise, with planned plastic models from Kotobukiya, a manga in Shogakukan's CoroCoro Aniki magazine, and an anime from DMM Pictures. The staff at the press conference didn't specify the format of the anime, but gaming news website Inside Games reported the "broadcast schedule" of the anime isn't yet determined.