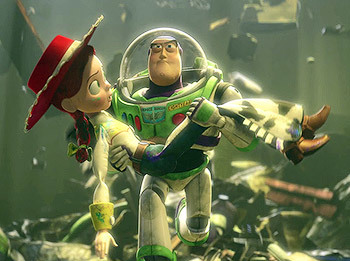 Something dangerous is going down. Maybe your arch-nemesis has gotten the upper hand on your group of True Companions. Maybe the dead have decided to rise. Maybe a disaster like a fire or a Super-Persistent Predator is coming your way. Whatever the reason, you need to beat a retreat posthaste. But there's a problem — your traveling companion. Perhaps they're too furious at the threat to run. Perhaps they're too petrified to move. Maybe they would run, but they're smaller or more injured and couldn't keep up with you. They may even be unconscious. So you do the only thing you can — you grab them and carry them with you.

This can happen with any number of different characters — a pair of Heterosexual or Platonic Life-Partners, a hero and their Love Interest, an adult hero and a Kid Hero — and involve any method of carrying. In cases where the "rescuee" wants to stay and fight, this might involve Complaining About Rescues They Don't Like. If the rescuee is simply asking too many questions, it might overlap with Don't Ask, Just Run. This is a good way to make sure No One Gets Left Behind. If the "danger" is the upcoming ground, it's probably Catch a Falling Star.

Contrast with Relocating the Explosion, in which the hero moves the crisis rather than the victim.