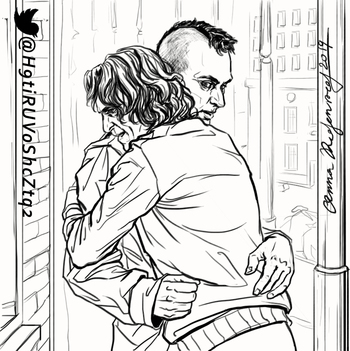 People Like Us
Arthur Fleck is beaten and left on the pavement amidst the pieces of his broken sign. Someone finds him there.
— The summary of the story.
Advertisement:

People Like Us is a Crossover Slash Fic between Joker (2019) and Taxi Driver written by RovingOtter set in an Alternate Universe retelling the events of Joker (2019) with the addition of none other than Travis Bickle himself, living in Gotham City, giving Arthur Fleck a helping hand after he's beaten up and left on the ground. The story follows these two broken characters finding something in each other that changes the course of Joker (2019) in gradually significant ways.

Over the course of the story the plot becomes an exploration of both characters' psyches as they try to figure out how to deal with the first real romance either of them has ever had, while also being forced to confront a myriad of conflicts that threaten to tear them apart, both external and internal. It can be found on Archive of Our Own here

can also be found on the same site.

It is definitely Not Safe for Work in that while it has less violence than its source materials overall, it turns up the sexual explicitness far beyond what either movie had.

Spoilers for Taxi Driver and the canon events of Joker (2019) are unmarked. Proceed with caution.