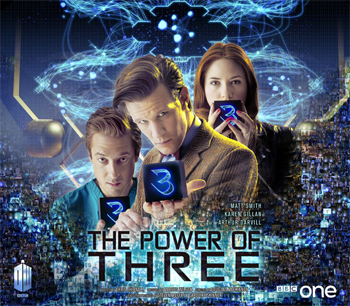 ... get it?!note And "to the power of three" is also another way of saying "cubed".
"Every time we flew away with the Doctor we'd just become part of his life, but he never stood still long enough to become part of ours. Except once..."
— Amy Pond
Advertisement:

The year of a ton of cubes, the first one with the Brig's daughter, and the one where the Doctor plays Wii Sports and gets very bored.

AKA: The Year of the Slow Invasion.

One day, approximately ten years after Amy and Rory started travelling with the Doctor (in their relative time), billions of tiny black cubes fall out of the sky. Professor Brian Cox is on TV talking about it and everything. The Doctor and his Ponds — including Rory's dad Brian — investigate, with the help of UNIT's new scientific leader, Kate Stewart. The Doctor decides to stay with Amy and Rory for a while and gets to know them as they do their everyday jobs and live their everyday lives. Amy is now a travel journalist and Rory is considering nursing full-time.

Only the cubes don't do anything. The Doctor can't bear the endless waiting, and takes Amy and Rory on more and more adventures just to stave off the boredom. They fight Zygons, end up in Henry VIII's bedroom, and so on. Months pass, then a year. Meanwhile, Brian is getting increasingly worried about his son and daughter-in-law when he figures out what kinds of things usually happen to the Doctor's companions in the end. The Doctor decides to shelve his rampant Attention Deficit... Ooh, Shiny! for a while and comes to properly live with the Ponds, because he just misses them terribly when they're not around. Brian keeps a daily video log of the cubes, but all they do is sit and be utterly, completely indestructible.

When the cubes eventually start moving, they light up, spit out fire, experiment on humanity and play "The Birdie Song". The Doctor rushes over to UNIT with Amy in tow, while Rory and Brian discover a starship portal in Rory's hospital and some rather scary aliens. While the Doctor and Amy have a quiet Friendship Moment, realising that their adventures can't last forever, the cubes start a global countdown after which they directly attack people's hearts, sending a third of Earth's population into cardiac arrest. Fortunately, the Doctor has more than one heart, and has both of them restored to full health after Chewing the Scenery for a bit. Even more fortunately, Kate Stewart turns out to be Kate Lethbridge-Stewart, the daughter of The Brigadier, and the Doctor knows he can trust her completely.

The Doctor and Amy rush over to the starship portal and confront the Monster of the Week: the Shakri, a bogeyman from Gallifreyan bedtime stories who wants to kill humanity with the cubes as a kind of interstellar pest control. The Doctor saves humanity when he realises he can Reverse the Polarity on the cubes. Then Kate gives the Doctor a kiss on the cheek, and Brian gives Amy and Rory his blessing to travel with the Doctor a while longer.

Alternative Title(s): Doctor Who S 33 E 04 The Power Of Three