WARNING! This character is a Walking Spoiler. Potential unmarked spoilers for season 5 and beyond! 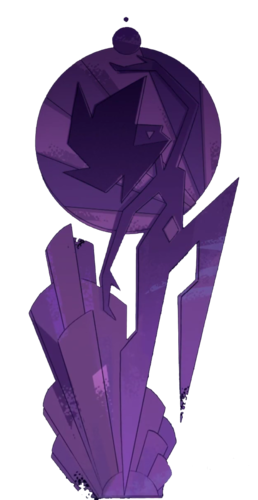 "No one can ever find out we did this. I never want to look back."

The youngest Diamond and the third mentioned in the series, prior to her appearance she initially was only inferred due to differences in symbols in the background of various episodes — older Gem locations have a symbol with white, blue, yellow, and pink Diamonds forming a larger diamond, newer ones have a triangular arrangement of white, blue, and yellow triangles. The third season confirms that she did exist, was the ruler of Earth when it was a Gem colony, and that Rose Quartz allegedly shattered her to liberate the Earth. The fifth season reveals what her relationship with the other Diamonds was like, and shows the true circumstances behind her supposed shattering.

For her tropes as her current identity, see it here.