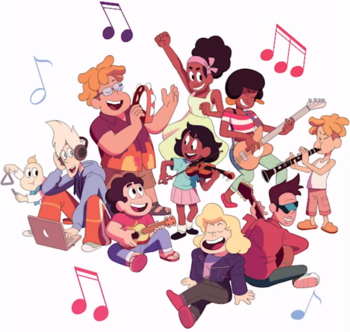 The kids and teens of Beach City (and Connie).
open/close all folders 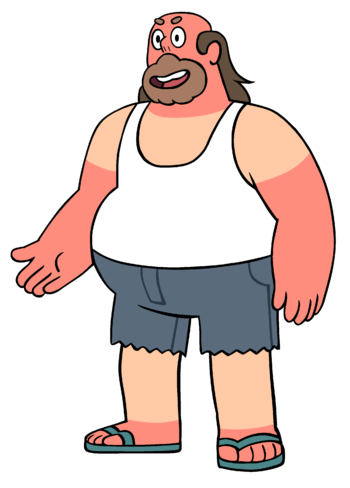 Greg Universe (formerly Gregory DeMayo) was a one man band. He didn't have much success, but seemed happy enough in his simple life. Rose Quartz fell in love with him, and they had Steven together, though she had to give up her physical form for her son to be born, as only one living being can be attached to the gem at a time. While Steven lives at the temple with the Gems, Greg lives out of his van as a reminder of his prime and owns Beach City's car wash, It's A Wash. He loves his son dearly, and the two of them hang out quite often, sharing their musical talents.

For his tropes, see his page.
Steven Quartz Universe 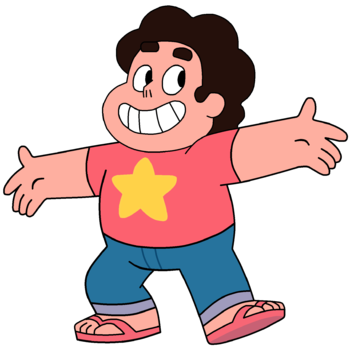 "Gems shouldn't fight each other."

Steven is the lovable, half-human and half-Gem boy who is still figuring out how to harness his powers from the gem he inherited from his mother. He's goofy, energetic and optimistic. He takes his role as a Crystal Gem seriously, learning all his lessons, and taking his discipline with good humor when the situation calls for it. He is very much in touch with his emotions, and does not shy away from saying how he feels. He is as impulsive as any other boy his age might be, but counts on his Gem family to keep him safe.

For his tropes, see his page.
Andy DeMayo 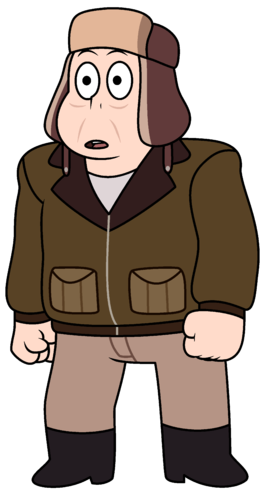 "It just doesn't feel fair, everything got so different. I wanted everybody to stay the same, but they– they just didn't."

Greg's long-lost cousin and Steven's uncle (Steven being his first cousin once removed). He shows up one day thinking that a bunch of hippies moved into his barn, but Greg sets him straight. He eventually starts to warm up to the Gems, and especially Steven. 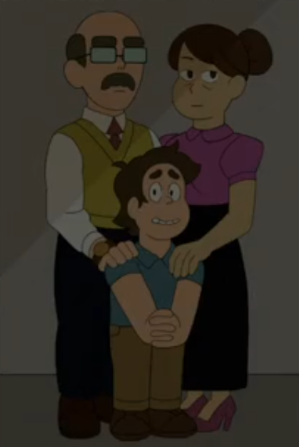 Mr. and Mrs. DeMayo when Greg was a kid.

Greg's parents and Steven's paternal grandparents. They're currently retired, splitting their time between Greg's childhood home in West Keystone and their timeshare on Florida Island.

Lars is a slacker who works at Steven's favorite snack shop, the Big Donut. He is a sullen, angry teen, overly concerned with being thought of as cool, and disdaining anything he sees as uncool. 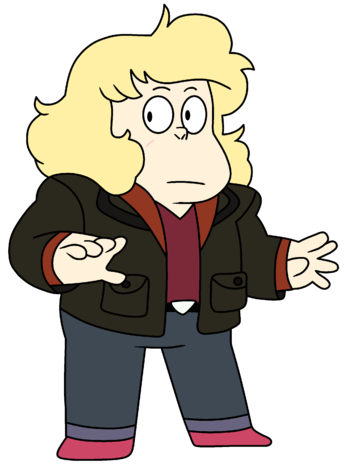 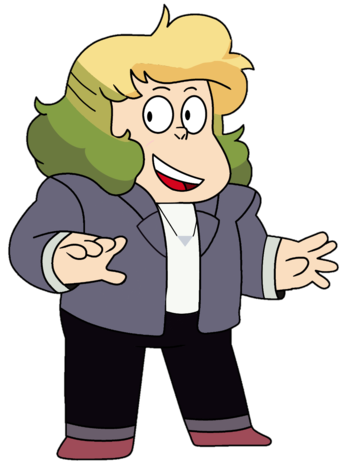 Click here for her appearance in Steven Universe Future 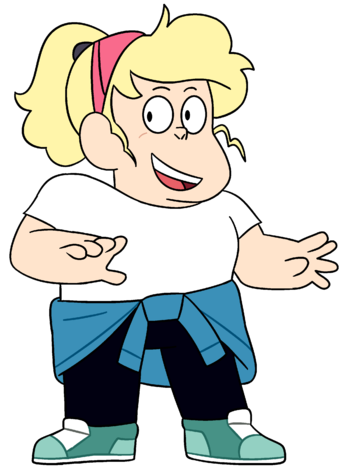 Voiced by: Kate Micucci
"When stuff gets hairy, I just keep my eyes forward, you know?"

Sadie was a clerk at the Big Donut. She's supportive of Steven's adventures, if weirded out by the other Gems, and had a crush on Lars. Eventually, after Lars' Alien Abduction, the stress of working alone really got to her, leading her to quit her job and join the Cool Kids in a band known as "Sadie Killer and the Suspects". They toured for two and a half years —along the way Sadie met Shep and began a relationship with them— before the band decided to part ways, with Sadie staying in the music business and becoming a musical duo with Shep. 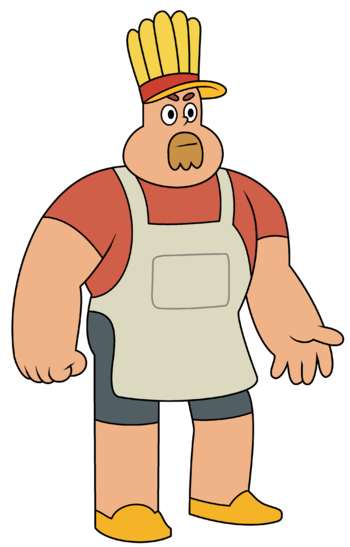 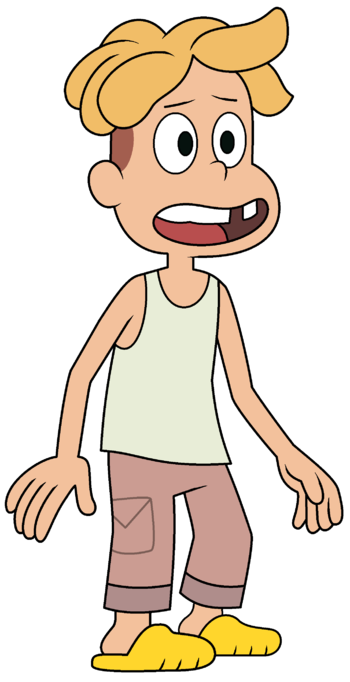 Peedee: You pick up a job to buy a house or raise your kids or impress your dad. You work away your life and what does it get you?
Steven: Smiles on faces?
Peedee: No. You get cash. Cash that can't buy back what the job takes.

Fryman's younger son. Tends to have a gloomy but pragmatic outlook on life.

"Don't get hung up on these minor 'facts'. Truth is about more than that, truth is a feeling in your gut that you know is true! Truth is searching for anything that proves you're right no matter how small, and holding on to that, no matter what."

Fryman's elder son, and Peedee's older brother. He runs a blog, called "Keep Beach City Weird", about the strange happenings around Beach City. He seems to be obsessed with the supernatural, to the exclusion of pretty much all else. 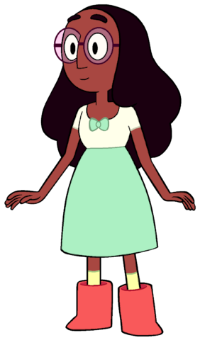 For her tropes, see her page.
Dr. Priyanka Maheswaran

Connie's mother and a medical doctor, Dr. Maheswaran is a rather strict authority figure and initially seems skeptical of her friendship with Steven, but eventually eases off of her and seems to warm up to him.

"My job isn't the exhilarating adventures you've been having with Steven. Or the life-threatening emergencies your mom deals with at the hospital. The most action I see is telling kids to quit loitering around."

Connie's father, who is a bit more laid back compared to her mother. He has a job as a private security guard for various beaches in and around Beach City. 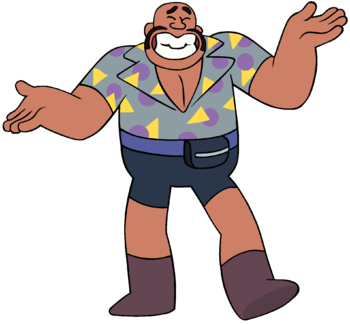 Harold Smiley, who seems perfectly willing to live up to the mood his name implies, is a Jack of All Trades. He runs the Funland amusement park, but also, during his younger days, did the safety video for Big Donut (which is still in use today). He is also the Master of Ceremonies for Beach City's underground wrestling league.

Kofi is the cranky owner of Fish Stew Pizza. He has two daughters, Jenny and Kiki. His mother, Nanefua, also assists with the pizza. He doesn't care for the Gems because of all the violence and destruction their presence causes in Beach City and to his business, particularly.

"Look, I don't know why I have to spell it out that I'm the evil twin and she's the good one! Don't ask me to help you with your homework, I'm at some metal concert."

Daughter to Kofi and twin sister of Kiki. She is friends with Buck and Sour Cream. Eventually, she and the other "Cool Kids" start jamming with Steven, which eventually leads to the formation of a band with Sadie Miller as frontwoman and lead singer. Jenny is the Suspects' bass player.

Daughter of Kofi and twin sister of Jenny. 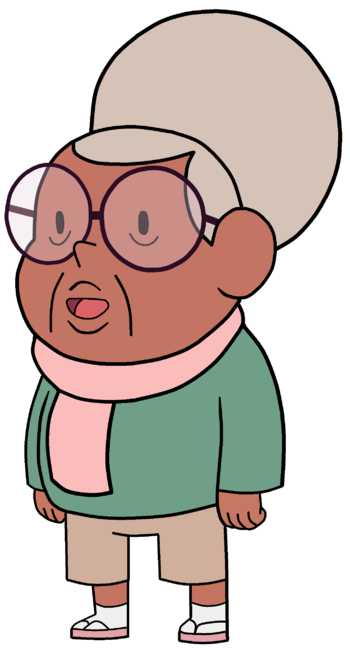 Mother of Kofi, grandmother to Kiki and Jenny, and, as of "Dewey Wins", newly-minted Mayor of Beach City. 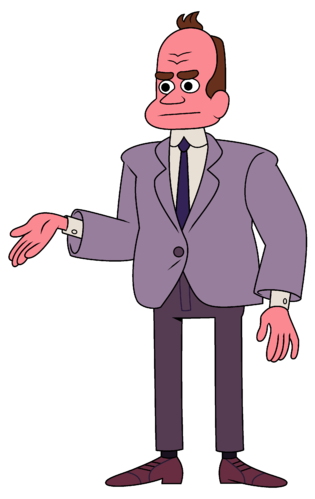 "Look, Steven; It's not lying when you're the mayor. It's politics."

Mayor Dewey holds the highest title in Beach City and is currently running for re-election. He does not seem terribly shaken by the presence of the Crystal Gems or the weirdness they bring to his town except when it might affect revenue. He has stepped down from the Mayor's office as of "Dewey Wins". 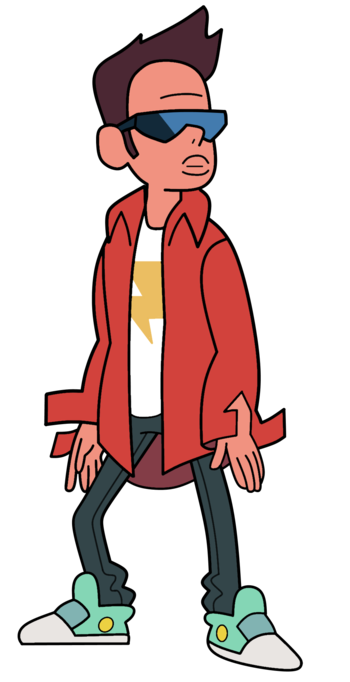 Buck: Man, [my dad] never kisses me like that.
Lars: That's rough, bro.
Buck: Not really. The lack of daddy kisses in my life made me who I am.

The son of the mayor. Friends with Jenny and Sour Cream. Eventually, he and the other "Cool Kids" start jamming with Steven, which eventually leads to the formation of a band with Sadie Miller as frontwoman and lead singer. Buck is the Suspects' guitarist, having learned everything he knows from Greg Universe. 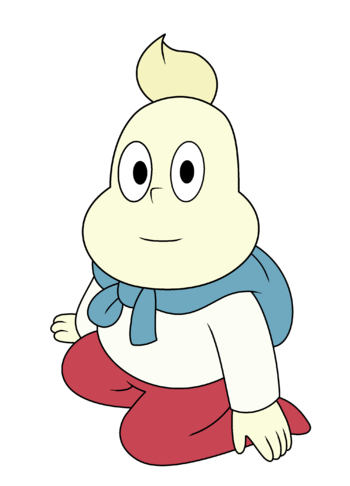 A young boy seen around town who doesn't seem to talk to anyone but his parents. He is often bored, and driven by boredom to commit acts ranging from minor vandalism to outright mayhem. Sour Cream's half-brother and Vidalia's son. 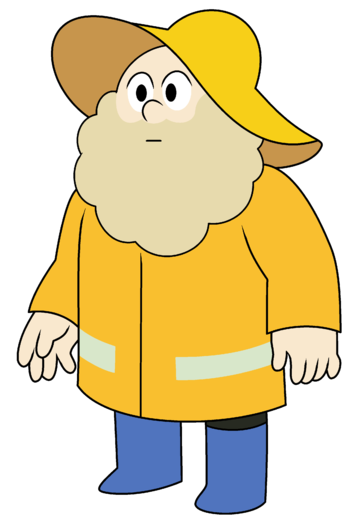 Onion's father and Sour Cream's stepdad. A fisherman by trade who spends a lot of time at sea.

"I can totally rave to this."

A mellow teenager often seen hanging around town. He's Yellowtail's stepson, Onion's half-brother, and Greg's manager Marty's illegitimate son. He aspires to be a DJ. Eventually, he and the other "Cool Kids" start jamming with Steven, which eventually leads to the formation of a band with Sadie Miller as frontwoman and lead singer. He brings his talents in electronic music to the band.

Click here to see her in her younger years. 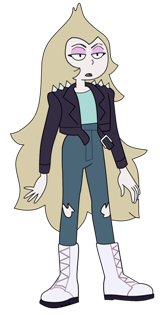 Sour Cream and Onion's mother. She's a long-time friend of Amethyst. She likes to paint artwork (mostly of Amethyst, whom she considers inspiring) in her free time, when she's not looking after her sons. 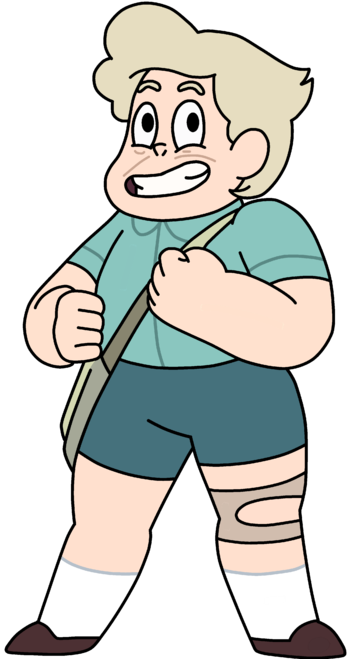 Other Residents of Beach City

The eyepatched proprietor of Suitcase Sam's, where he sells various bags and cases.

A teen who works at Beach City's local movie theater. 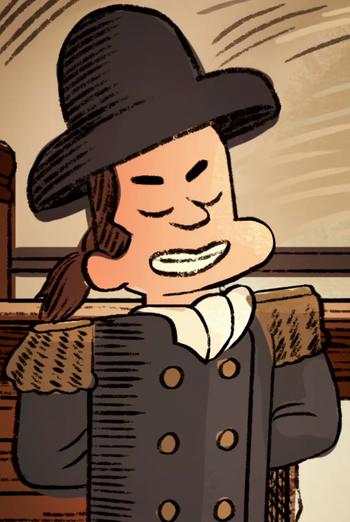 Mayor Dewey's ancestor, an explorer who helped to colonize the land that would one day become Beach City. According to Mayor Dewey, he was flawless and ruggedly handsome. According to Pearl, who was actually there, this is less than entirely accurate. 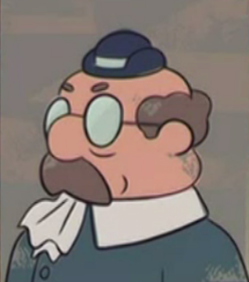 First mate of Captain William Dewey, the founder of Beach City. Buddy traveled the world and studied Gem locations in an attempt to make a name of his own.

"You've had a taste of Kevin, and now you're obsessed."

A pompous teenager occasionally seen hanging with the cool kids of Beach City. Everyone seems to hate Kevin, and he wouldn't have it any other way.

Click here to see how he looked in Greg's story.

"See, Greg, this is your problem: you want one huge woman, when you could have multiple small ones."

Greg's manager from when he was a celebrity musician, and Sour Cream's father.

A classmate of Connie's, whose arm she accidentally breaks on reflex.

Steven (as Zoltron): Zoltron sees... sadness in your future, no matter what you do.

A sad, pessimistic Englishman who used to be partners with Mr. Smiley in a stand-up comedy act. He shows up in "Future Boy Zoltron" looking to get in touch with his old friend. 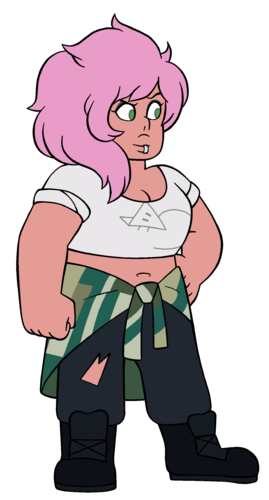 A mysterious, non-speaking pink-haired biker girl that Pearl gets a crush on in "Last One Out of Beach City" because of her resemblance to Rose Quartz. Pearl manages to get her phone number. 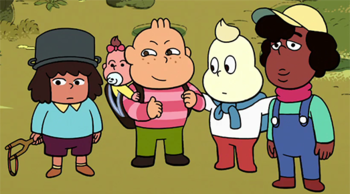 Three kids Onion's age (and a baby) whom Onion hangs out with. 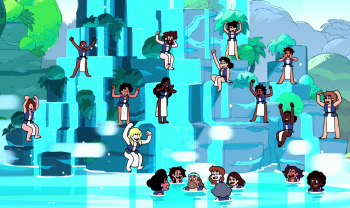 The descendants of humans put in Homeworld's People Zoo back when Earth was still a colony. 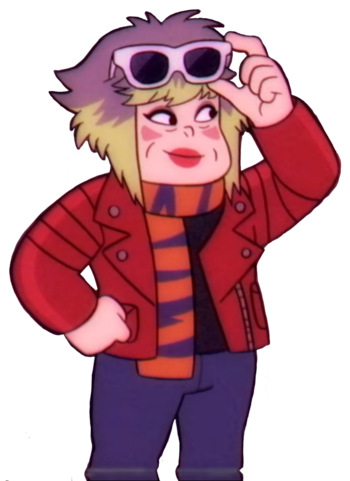 An old friend of Greg's from his days in the music industry. Provides Sadie and the Suspects their first big gig in Empire City.

Sadie's partner that she met while on tour with the Suspects. They first appear in "Little Graduation".