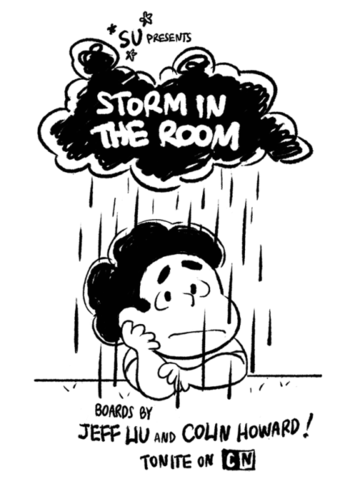 The episode begins right after the events of “The New Crystal Gems”, only the Gems and Greg have all gone off somewhere leaving Steven and Connie alone in the house.

Connie ceremonially returns Steven's bed to him, and as they return downstairs, Connie says she hopes she'll get to say goodbye to the Gems before her mother arrives. Steven is in no hurry for Connie to leave, as usual – but Connie asks if he doesn't need some alone time or space to think about his harrowing adventure in space.

Steven: The last thing I need is more space!

Connie calls her mother, but the call goes to voicemail, uncharacteristically for her mother. Connie is a litte bewildered, but since she can't go home without a ride, she stays.

Steven suggests they pass the time.

...the shot changes to indicate they've passed quite a lot of time. They assembled a 1000 piece puzzle, built a rather lofty house of cards, and are playing "Weird Words". Connie, now more than a little concerned at the absence of her usually prompt mother, calls again and the voicemail picks up. Again. Steven starts another round of Weird Words to distract her, but her worry is infecting the game as she suggests articles of speech that indicate she's worried her mother has gotten into a car accident ending in an explosion. Steven offers to take Connie home on Lion, but it's not the getting home that concerns her, it's her mother's out of character lateness without calling.

Finally Priyanka arrives, and is all apologies, explaining that a surgery ran late and she had to cover for another doctor, and that her phone died because a patient might've stolen her charger. She thanks Steven for allowing Connie to stay late, and murmurs to Connie that Steven (still in his Zooman outfit) must be back from the spa.

Connie: No, I said space.

All alone with nothing but his thoughts, Steven showers and changes back into his usual clothing. He microwaves himself a little mac and cheese, then sits in the living room to eat it. Unfortunately, he's not entirely alone. The room is completely overshadowed by the calm and benevolent painting of Rose that hangs above the door. Steven tries to ignore it for a while, then takes his meal outside – only to have a delicate little rain suddenly turn into a furious thunderstorm.

Back inside with his waterlogged meal, Steven begins thinking out loud about Rose. In response to his emotions, his gem lights up and he walks into Rose's room.

After being awkward about not having been in the room lately, he asks it to show him his mother. A Cloud!Rose is created and they share a sweetly awkward handshake. Steven tries to bond with her by playing video games, and then football. They laugh and hug, and Steven wonders why he never tried this before. He tries to take a selfie to have a memento... But nothing the room shows is picked up by the camera. Steven realizes that the Cloud!Rose isn't really his mother – she's what Steven wants his mother to be like. He demands to know what she really is, and as his emotions bubble up about what Rose did to Bismuth and to Pink Diamond, the room reflects his turmoil by stirring up a storm.

Steven accuses his mother of being a user, a hurter, and a liar, who abandoned the Crystal Gems and Greg.

Steven: They don't know what to do without you!

He accuses her further of having only created Steven himself to get away from her mistakes and leave him to clean up the mess she left behind.

The Cloud!Rose reminds him of what the real Rose told him in the videotape she left him, and asks him if he believes everything she said to him there was a lie.

Steven calms again as he remembers the tape, and admits he believed she meant her words sincerely. They start to embrace again, and Steven lets the illusion of Rose drop. He leaves the room and returns to his cold, waterlogged meal.

But the door opens and-

Greg: Look who's back in jean shorts!
Steven: Dad! Garnet! Amethyst! And Pearl!

Greg has brought over pizza and apologizes that they were out of pepperoni so he got mushroom.

Steven is just happy to have his family together. Pizza without pepperoni, but with mushrooms hardly figures into his restored happiness.