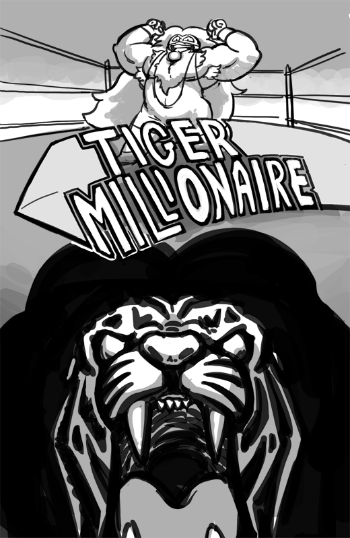 Amethyst: In the ring, nobody can tell me what to do! And if they try, I HIT 'EM IN THE FACE WITH A CHAIR!
Steven: And people... like that?
Amethyst: "Like it"? They LOVE it! Aha, well, they hate it, but it's all part of the fun, you know? Everyone here, gets that. Urggh! You don't know what it's like having Pearl and Garnet on your back all the time!
Advertisement:

The episode opens with Amethyst getting a lecture from Pearl. Apparently Amethyst's penchant for violence led her to punch their last enemy — a blood polyp. Pearl is telling the shorter Gem off for not thinking that would cause the polyp to burst and cover them all in red gunk, especially little Steven. Steven, ever cheerful, says it's not so bad once you get used to it. Pearl insists he won't feel the same once it hardens. Steven wisely goes to wash off, but he's too late. The blood polyp gunk hardens and freezes him in place.

Amethyst, fed up with being yelled at takes over for Pearl, reciting a litany of her own bad traits as Pearl tends to call them. When Garnet is asked to give an opinion, she simply reminds Amethyst that she's a Crystal Gem and should act like it. Amethyst finally stalks off and runs to her own room in the temple. Pearl seems satisfied they've gotten through to her this time, but Garnet doesn't seem convinced. She walks off with only a sigh. Pearl goes into the temple as well, leaving the now resin-trapped Steven alone, forgotten.

Some hours later, night has fallen. Steven has, with no other recourse, gone to sleep in his blood polyp shell. But Amethyst comes out of her room, covered in a black cloak, and sneaks out into the night. Steven calls after her but she ignores him or doesn't hear. He manages to fall over and shatter the resin so he can follow her. He finds her having used her Gem shapeshifting powers to become The Purple Puma, the most hated wrestler in Beach City's underground wrestling league.

Steven watches her make short work of "The Loch Ness Bloggster" Ronaldo Fryman and several other comers, before confronting her on her way home. Amethyst is upset to have been caught out and explains that she comes to blow off steam after having Garnet and Pearl on her back all the time. Amethyst complains that Steven wouldn't understand, but Steven counters by proving he does. He does imitations of Pearl and Garnet scolding him for bringing peanut butter on missions and for not taking his Gem duties seriously enough. He asks if he can join Amethyst in the ring. She considers telling him no, but having a partner would allow her to fight tag team. Steven gathers together a bunch of junk from his room and quickly assembles a costume to declare himself Tiger Millionaire, complete with Backstory. Puma hasn't got one, so Steven says they'll workshop it later.

They return to the ring, but Amethyst won't let Steven fight, saying she's only using him for the ability to participate in fighting two people. He's willing to sit it out until one of the other teams is about to do something sneaky to Amethyst. So he lures in the other wrestler and attacks him. From that point on they're a team, with Tiger being a rich Jerkass type and Puma doing all the heavy lifting. Sadie says Tiger looks like Steven, but Lars scoffs. The duo have a great time until Steven-as-Tiger does one jerky thing too many and upsets Lars. The announcer rubs it in by calling Tiger Millionaire "the cruelest creature on the face of the planet." This hits generally sweet and kind-hearted Steven hard, and he is consumed by guilt. Amethyst tries to help him shrug it off in her tactless way, and inadvertently reveals that the constant scolding from the other Gems is getting through to her.

Amethyst: Listen, Steven. You can't let anyone make you feel like garbage.
Steven: Is that how you feel?
Amethyst: [scowling] I only feel how I wanna feel.

The pair are fighting one more tag team match when Garnet and Pearl show up, having found one of the prototype promo posters Steven had doodled in his room. When they demand that the Puma stop wrestling, Amethyst refuses, violently. Garnet and Amethyst begin brawling. Tiger takes the microphone and tells Puma's backstory: that Puma was too wild for the others in the jungle he came from, so he came to the wrestling league where he could cut loose, be himself, and not have to constantly live by the rules of those around him. Tiger turns a plaintive face toward the angered Gems.

Garnet takes the mic from Tiger and says, no, dashing the audience's hopes. But to Steven and Amethyst's surprise, she goes on to describe herself and Pearl as the anti-wrestling league, here to stop wrestling. Pearl takes a second to catch on as well, before getting into the act. The audience begins chanting for Tiger and Puma. The Gems pretend to lose and while the fake fight is going on, Amethyst and Garnet exchange apologies.

Lars is a fan of Tiger Millionaire once more after he and Puma have saved wrestling. We Iris Out over a Single Tear that rolls down his cheek.