WARNING! Unmarked spoilers for season 5 and Steven Universe: The Movie! 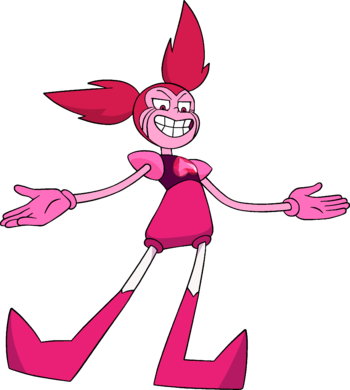 "Oh, that's right, I heard the story over and over again.
Gee, it's swell to finally beat her other friends!"
Click here for her original form 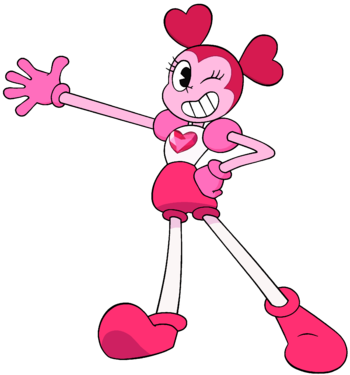 "Your new best friend, Spinel, is here!"
"Who am I? WHO AM I?! What are you even saying?
I'm the loser of the game you didn't know you were playing!"

The main antagonist of Steven Universe: The Movie, a pink Gem with long, rubbery limbs. She holds a deep grudge against Steven for some reason and wants to perform a Happy Ending Override by destroying him and all organic life on Earth with a giant injector.

In truth, though, her grudge lies with Steven's mother, Pink Diamond (a.k.a. Rose Quartz), as Spinel was created to be her playmate. Now, she seeks revenge on Steven because his mother abandoned her 6,000 years ago when she first got her colony on Earth.