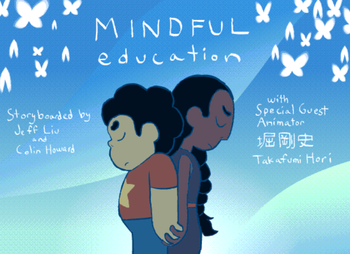 Connie arrives at the beach house and knocks on the door. She has an uncharacteristically grim expression. She knocks, and Steven answers, with a shiny bald head.

Connie walks past without even noticing and begins unpacking her bag for training. Steven makes a quip about inheriting male pattern baldness from his father, but it showing up unexpectedly overnight. Connie doesn't bat an eye, responding absently. Steven. frustrated and confused by Connie's reactions simply blurts out:

Steven reveals he was just joking with a bald cap. He starts to ask Connie if she is okay, but Garnet and Pearl arrive. Pearl points out how excited Garnet is to sit in on this special training. Connie asks if she was supposed to bring something, but the Gems say themselves is enough as they'll be training to fight as Stevonnie.

Shortly up in the Sky Arena, Pearl begins training by having two holo-Pearls fuse into a giant holo-Pearl to fight Stevonnie. Steven and Connie do their Fusion Dance and Stevonnie is ready to fight! Garnet spins her sign around, and the fusion fight is on!

Stevonnie puts Steven's floating powers to use which confuses the fusion for only a tiny second. They realize the power for what it is and go in to finish the fight on the surprised holo-Pearl fusion. But as they go in for the coup de grace, the face of a startled boy appears, and...

The fusion has lost their cohesion and Stevonnie falls apart. Garnet and Pearl make sure the kids are unhurt. As Steven asks what happened, Connie gives a pained grunt and runs off. He follows, finding Connie huddled in a ball on the stairs. When Steven asks if she's all right, Connie tells him she did something terrible at school and doesn't know what to do about it. Steven tries to comfort Connie by touching her shoulder but she pushes him away and explains that she accidentally beat up a boy at her school; someone she didn't even know. He bumped into her unexpectedly and her Gem training just kicked right in without her thinking about it. She explains she was so embarrassed she just ran away. Steven tries to console his friend by telling her she didn't mean to hurt anyone, and that sometimes you do hurt people by accident.

Steven: You just have to try not to think about it.

Before he can offer any more advice, Garnet joins them. She takes them back to earth, and sits with them on the beach. She explains that a fusion must be balanced to hold together. Imbalance can cause a fusion to lose touch with reality, hallucinate, and fall apart.

Garnet: That is to say, if one of you is falling apart, your fusion will as well.

She goes on to explain to the kids that in order for their fusion to be balanced, they must understand their feelings by seeing them clearly without running from them. She tells them they need to form Stevonnie once again. Steven and Connie look to each other, agree, and without getting up from their seats on the sand, Stevonnie has replaced them sitting in the space between them.

Garnet begins taking them through a guided meditation: she explains that they're safe in the darkness and they can hear the waves and let the sound fade away.

Stevonnie and Garnet are together on the mindscape. As Garnet describes how an intrusive thought can take over and cause a person to focus on it to the point of losing touch and giving it far more importance than it deserves.

Stevonnie embraces Garnet's lesson and the mindscape reveals Connie's memory of hurting the boy. But even though she feels terrible, Steven is still there. The meditation ends with all four components of the two fusions lying together on the mindscape watching thoughts go by without acting on them.

Garnet and Stevonnie: ♫ It's just a thought. We can watch them go by from here.♫

Another training day arrives, and Connie is her usual bright, cheerful, and spirited self. She explains to Steven that she apologized, explained, and that it all worked out. Jeff, the boy she injured, understood. She shows a picture of him with his arm in a sling, but he's smiling to show no hard feelings. To Connie's delight, Jeff even wants to learn from her when he's better. Feeling much more confident and ready to fight as Stevonnie once again, Connie goes to change.

Steven glances at Rose's sword and sees one of the thought butterflies from the mindscape Stevonnie shared with Garnet... but soon they're back in the Sky Arena fighting holo Pearl again. Pearl compliments Stevonnie on their technique. As Stevonnie moves in for a sword thrust, Stevonnie begins hallucinating again: the sword thrust has triggered Steven within Stevonnie. An image of Bismuth appears before their eyes, and Steven cries out in frustration and dismay.

Stevonnie: [Steven's voice] Oh no. It's coming from me now!

Garnet yells encouragement to them. Pearl asks what's happening, but Stevonnie is able to focus on Garnet's advice. As they prepare to return to the fight, though a new hallucination appears: Jasper, succumbing to corruption. The image grows huge and lurches toward Stevonnie, Steven tearfully trying to explain himself to Jasper. But then Jasper becomes the Eyeball member of the Ruby Squad.

Stevonnie is still physically one being but Steven and Connie begin having a conversation as the imaginary enemies grow larger and loom ever closer.

The trio of defeated enemies burst into rays of light and converge, coruscating and morphing until they become an enormous image of Rose Quartz, glaring down on Stevonnie with anger and disapproval. Stevonnie drops their sword and backs away, right off the edge of the Sky Arena.

The startling realization that they're falling knocks Stevonnie out of fusion, leaving Connie and Steven in freefall! Connie, still level headed, immediately suggests they fuse again because they can hover and be safe. But Steven is completely overcome with his guilt and grief. Connie angles herself so her fall collides with Steven so she can grab him.

Steven: I didn't want to hurt anyone! I'm sorry! None of them would let me help them! I had no choice!
Connie: It's okay!
Steven: No it's not!
Connie: But it's okay to think about it!

Connie goes on to console Steven when he protests how bad he feels. She tells him he has to feel how he feels, accept it, and move on. She explains that's how it was for her with her classmate. Steven accepts it, and they fuse back into Stevonnie. The hallucinations loom toward them again but Stevonnie can embrace Garnet's advice from both parts of themselves now. They breathe through it, and use their floating power to drift safely to earth again.

Laughing with relief from having fused again in time to survive, and having learned that being honest with themselves helps recover from the thoughts which seem overwhelming, Stevonnie drops to lie in the grass and watch the clouds go by.