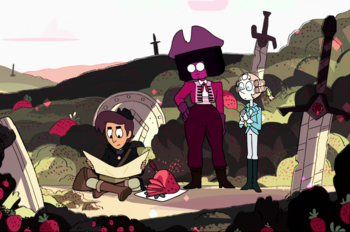 Steven and Connie, atop Lion, travel through one of his roar-portals and park in the library. Lion walks off the moment Steven and Connie have dismounted. Connie expresses surprise and amusement that Steven's never been to a library considering they contain one of his favorite things:

Connie gets set up to study as she's trying to get a head start on seventh grade. She explains sheepishly that research on the Internet isn't always reliable as she turned in a report stating Raccoons have Eye Beams. While she gets to work, Steven explores the library with his typical exuberance.

He lies on one of the wheeled stepstools, and comes across a tome under one of the bookshelves, covered in dust. He blows the dust away and after leafing through it a bit, realizes it is the journal of one Buddy Buddwick, first mate to William Dewey (ancestor of Mayor Bill Dewey), who founded Beach City.

Steven brings the book back to Connie and once Steven tells her what the book is, Connie is too excited to keep studying:

As the two of them begin to read, the view changes to their imagination of what Buddy must have looked like. Recalling the play in which Jamie the mailman portrayed first mate Buddy, that's who they envision as Buddy. He laments that he is bored with Beach City and wants to be more than a simple first mate who no longer has a voyage. He sets out to travel the world looking for a way to make a name for himself.

He goes across the sea and finds the Strawberry Battlefield, where he encounters Garnet and Pearl in colonial garb. On hearing the reason he's visiting the battlefield, Pearl takes Buddy's map from him and marks all the places that are too dangerous for a human to visit if he wants to live. Garnet, on the other hand, encourages Buddy to follow his vision and be adventurous.

Buddy's travels take him to several places across the world already familiar to Steven and the Gems: the home of the Heaven Beetle, the Sea Spire, the communication hub, the inverted Pyramid, and the sand castle.

Reaching that last, Buddy is overheated and exhausted, but feels he must leave on his coat lest passers by mistake him for some wanderer without a purpose. As he's about to pass out from the heat, out of the haze of the desert comes the woman Steven and Connie (and the viewers) recognize at Rose Quartz. She has seven lions with her, and although Buddy is frightened, he comes to no harm. He laments of never making a name for himself. But Rose, upon reading his journal, says that he has a special gift for making a story sound fresh, exciting and new, even if it's a familiar one the listener has heard before.

Inspired by what Rose told him, Buddy returned to Beach City, became an author, and founded the library.

Connie and Steven recognize a portrait hung in a place of distinction as being the real Buddy Buddwick. They admit that they prefer their imagining him as Jamie. The portrait changes to the Jamie-version of Buddy who winks and smiles before the episode Iris Out.