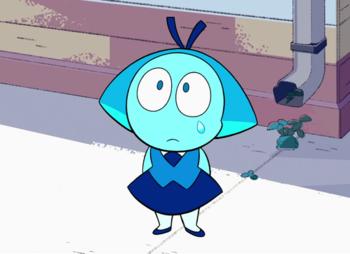 "Are you my dad? I need to find my dad."
Advertisement:

Steven is waiting for a package delivery while Garnet and Pearl build a sandcastle and Amethyst drinks cans of beans, but is worried when the usually-punctual Jamie fails to show. He eventually heads for the Big Donut when Amethyst agrees to wait for the mail with him, only to find Sour Cream handing out missing person flyers for Onion, who's been gone for a couple days, and the Big Donut closed. Steven goes around to the back, wondering if Lars and Sadie are secretly watching scary movies in the staff room, only to find Barb, who was just dropping off Sadie's lunch and confirms she hasn't seen Sadie since yesterday. Talking, Steven reveals that Sadie meant to come home last night, and Barb is worried both by this and that Jamie never reached Steven's house after she personally sent him off with the package. They head out to search for the missing people.

Searching the arcade, Steven confirms that Onion is not in the vending machine, only to run into a small blue Gem who asks him, "Are you my dad?" Startled and confused, Steven replies in the negative, and the Gem flies off. Back at his house, Steven describes her to the Crystal Gems and Connie, who are trying to draw her. Garnet drew herself instead, and Steven judges Connie's manga-style drawing the best, to Pearl's irritation. The group splits up and heads out to try and find the Gem. Connie speculates to Steven that the Gem may have been adopted by a human, since Gems don't usually have parents.

Searching the woods near where Onion likes to play with his friends, Connie encounters the Gem while Steven gets stuck in a hollow log. When the Gem repeats her question, Connie offers to help her find her dad if she wants. The Gem reiterates that she's not looking for "your dad" but "my dad". She gets interested when she hears Steven address Connie by name, though, and upon getting confirmation of the girl's identity, yells for someone named Topaz. The ground shakes as an enormous fused Gem appears, with all of the missing people contained within her body, all of them save Onion with their mouths blocked so they can't call for help. Connie draws her sword, but is captured when the Topazes unfuse and ensnare her. Steven manages to get free of the log and tries to rescue his friends, but the small Gem pulls a wand from her head and uses it to immobilize him before throwing him against a tree. As he falls unconscious, he hears the small Gem talking about all they have to do is find "my dad" and they'll be done, telling Topaz that she wonders why Homeworld even sent an Aquamarine when Topaz could have done it herself.