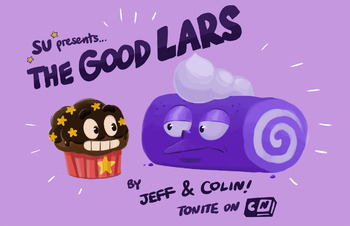 At the Big Donut, Sadie asks Steven to taste a pumpkin, and upon doing so, Steven declares it's delicious! It's not only delicious, it's a pumpkin cake shaped like a pumpkin. While he gushes over how clever it is, Lars, the baker, says it's simple to bake six crescent shaped cakes and use cream cheese frosting to hold it together in the shape of a pumpkin.

Before he can go on, though, Buck Dewey enters. Lars flies into a panic and hides the cake, then leaps to wait on Buck.

Buck: I would like to order ... you to come to dinner.

He explains they're throwing an ironic potluck like the adults do. Everyone should bring a dish.

Steven and Sadie of course encourage Lars to bake something, but he's leery of doing so. Those are The Cool Kids throwing the party, and although he enjoys baking, he's worried it's an uncool thing for him to do. But Steven and Sadie persist, and with their help he makes a dessert for them to taste: an Ube — a purple yam cake. They taste it and declare that not only is it amazing, it should be what he brings to the potluck.

At the potluck, Steven is first to arrive, with snack sushi.

There is a knock and it's Sadie — who didn't bring a dish, but brought paper plates for the dish Lars brought. No one is disappointed, and Sour Cream is delighted at not having to do the dishes.

Steven volunteers to go find Lars. He looks at Lars' house but his parents say he's not there. He checks the Big Donut, which is closed. After having searched everywhere he can think of, he does his high jump and shouts Lars' name at the top of his lungs ... before finally thinking to just call Lars on his cellphone. Unfortunately Lars doesn't answer, and Steven can only leave a voicemail.

He returns to Sour Cream's house and for some reason looks in the trash — there he finds evidence that Lars was within steps of coming to the potluck, but chickened out and trashed his beautiful dessert. Disappointed, he returns to the party. When it breaks up a little later, he and Sadie discuss their disappointment. Sadie finally says she should stop trying to make him happy and focus on her own life. Steven bids her goodnight, and as Sadie walks alone, two now-familiar shadows loom once more out of the darkness.