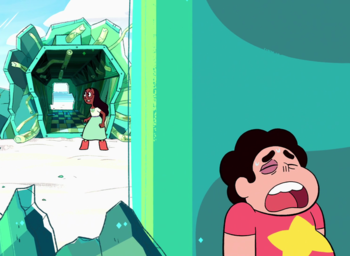 It's only moments after the events of "Jail Break". Steven and the Gems are still standing at the water's edge. It would appear that Lapis Lazuli has made good on her threat of holding Jasper prisoner beneath the sea forever, for neither Malachite, nor the two gems de-fused have returned.

Steven stammers as Connie demands on the phone to know what's going on. Amethyst pretty much lets on by screaming "WE WON!" and beginning a victory dance, much to Pearl's dismay. Greg's van pulls up and Steven promises to call Connie back. He greets his father, who explains he came back to see the ship leaving, then saw it come back, and was happy to see the Crystal Gems were once again victorious. Steven corrects Greg that it really wasn't anything like that. Big, beefy Jasper pretty much curbstomped them and took them all prisoner, especially Steven, whom Jasper had mistaken for Rose.

Steven goes on to describe that even after Garnet's comeback and subsequent beatdown of Jasper and crash of the ship, Jasper was still spoiling for a fight. To Greg's mounting horror, Steven explains that the ship crashed, and Steven almost died. Steven goes on to describe how Jasper survived and fused with Lapis — and they were outmatched and out of luck, until Lapis Lazuli's sacrifice turned the tide. As Greg hears each detail worse than the last, his terrified expression worsens comedically.

Overcome with fear and anxiety at what his only child has gone through, Greg excuses himself to go to his van and listen to his relaxation music CD. Only poor Greg is so shaken up that he can't tell which one is which and the first CD he plays is heavy metal rage music, serving to make things worse. As Steven watches his father desperately try to get ahold of his feelings and calm down, his phone begins to ring again. It's Connie. By his expression, Steven has, as a result of his narrative — and Greg's reaction to it — realized that he did come close to dying — multiple times. Moreover, he's also come to the conclusion that knowing the danger he's in is terrible for his loved ones; not just his father, but also Connie.

Steven doesn't answer the phone, but begins walking and talking to himself, trying to come up with what to tell his best friend, fusion buddy, and crush. He tries the truth. He tries a "funny story..." angle. He tries "it was all just a dream!" but gives up that last one because he knows Connie's too smart to fall for that. After some time, Steven finds himself on an overcropping that overlooks Beach City. Behind him, Ronaldo Fryman approaches, and tells Steven that Mayor Dewey has told the citizens they can return.

Ronaldo commends Steven on his choice of place to come brood, and tells Steven that they are two of a kind — nobly sacrificing friendship and companionship for the greater good — to protect those around them from the dangers of the weird world. After Ronaldo runs away to the beach to try to get footage of the wreckage for his blog, though, the phone begins to ring again. It's Connie. Again. And she is clearly methodically calling and letting it ring until the phone goes to voicemail, then trying again, hoping Steven will pick up, since she's determined to wait him out.

Steven ruminates — in song — how he hadn't really taken seriously his life as a Crystal Gem, and how dangerous it is. But now he must. Steven visibly agonizes over what to do, because he doesn't want Connie to be in the line of fire from the obvious dangers of his life he now has to face. But now he sees for himself, and he doesn't want anyone he loves to be hurt.

He takes another look at Beach City below and resolutely turns to the phone. He swipes IGNORE against Connie's call. He goes home, and finds the other Gems beginning to clean up the house. Steven says they have to keep the Beach City townies off the beach for their own safety. Pearl eagerly suggests building a fence. Amethyst volunteers to be a crocodile if they build a moat. Garnet shuts it all down, saying that Steven needs to be around his friends. As his phone begins to ring again, Steven refuses to answer it, even when Pearl points it out. Steven explains that he can't expose Connie to danger even if that means ignoring her forever, and that it's the responsible thing to do.

Amethyst points out it will be hard to do so since Connie is coming up the steps. As Connie asks Pearl if Steven's home, he sneaks out the window. Pearl awkwardly says she doesn't understand human relationships and says goodbye, shutting the door. Connie turns to walk away and spots Steven running away from her. She races down to the beach and runs pell-mell through the wreckage only barely glancing at the ship around her, calling for him. When he doesn't answer, she calls his phone.

Steven, hiding, and clearly pained by the idea of never seeing Connie again even if it will keep her safe, refuses to answer the phone, growing more despondent the longer it goes on. Finally, though, he responds, sending Connie a text that reads:

I don't want to be friends anymore.

Connie, stricken and hurt, but able to hear her own ringtone in the distance, calls Steven on the phone. He tells her he can't be with her anymore because he has a destiny. Connie calls out to Steven and calls Steven out: if he really wants to terminate their friendship, she will only accept and believe him if he says it to her face.

Steven appears at the top of the broken off thumb of the ship, silhouetted in the sun, and leaps down to Connie, his head hanging. But after a second he raises his head to face Connie and reveal he's literally a snotty, sobbing mess.

Steven: I still want to be friends!

Connie is surprised when she sees his black eye. She asks him what happened, and he explains. Before long they're sitting at the water's edge, discussing Lapis' sacrifice. Connie insists the least she can do as his friend is listen.

Connie: I want to be part of your universe.

Greg rolls up in his van, much calmer. Steven asks how his dad is doing. Greg assures Steven he's okay and back to being his cool dad again. He offers Connie a ride home. As the Universe van makes its way from the Beach and through Beach City, the residents of the town (except for slackering slacker Lars) are all doing their part to clean up and get back to normal.

The episode ends with an Iris Out over the back of Greg's van as it drives through town.