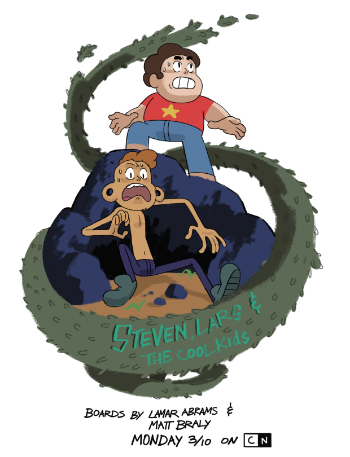 The episode begins with Garnet, Amethyst and Pearl looking down from a cliff at a pond filled with moss. Steven comes onscreen and hops on the rocks in the pond. The other Gems shout in alarm, and Garnet picks up a boulder and hurls it at Steven as the moss starts to crawl up the rock he was standing on. Just before the moss touches Steven, Garnet's thrown boulder hits the edge of the rock Steven was on and launches him into the air. Steven falls, but Pearl catches him. Once Pearl puts him down, she explains that the moss was tended by Rose Quartz, Steven's mother, and that every year she would stand on a high mountain and somehow bring the moss there. The Gems tape off the area in order to give themselves time to think of a way to move the moss to the mountain. Steven asks if anyone else is hungry. The other Gems only stare at him, which makes him assume it is just him.

Steven walks to the pizza parlor, where he sees Lars outside, leaning against the wall. Steven runs up to him, trying to give him a high five. Lars ignores it, so Steven ends up "high-fiving" Lars’ chest. Steven asks Lars what he is doing. Lars claims he is “chilling”, but Steven says that he knows it’s to get a hot pizza out of the oven, and begins walking inside. Lars panics and stops him. Steven then notices that Sour Cream, Jenny, and Buck Dewey are eating inside, and asks if Lars knows them. Lars says no, but claims his relaxed pose will make "the cool kids" notice him. As the cool kids are leaving, Lars turns around and ignores them, but Steven walks over to them. Steven attempts to give another high five, and, unlike Lars, the three teens accept. The camera switches back to Lars, who is still attempting to ignore the cool kids, and is panicking as he tries to figure out what's happening without him or the audience hearing what Steven is saying. Finally, when he turns around, Steven is there, surprising him. Steven exclaims that Lars and him are going for a ride with the cool kids. After a moment of flustering, Lars tells Steven to not screw this up. Steven remains cheerful in spite of Lars’ negativity.

As everyone is getting in Jenny’s car, Steven says that it is time to buckle up. Lars tells him not to be so lame, but Sour Cream tells him that it's not lame to be safe, and everyone buckles up. This routine of Steven saying something earnest or nice while Lars tries to appear cool, and the cool kids siding with or complimenting Steven continues until they reach "Dead Man’s Mouth", which is the lake with the moss in it at the start of the episode. Steven panics, understanding the danger, but expects them to be stopped by the police tape the Gems put off to warn people away. When the cool kids reach it, however, they rip through it and walk past, followed by Lars and Steven. As everyone prepares to swim, Steven tells them that it is dangerous. They only commend him on adding ambiance to "Dead Man’s Mouth" and jump in. Lars attempts to join them, but is hugged by Steven, who is in tears at this point and begs him not to get in. Lars had just brought him and Steven to the water’s edge when the cool kids are attacked by the moss and dragged under. Steven explains that the moss was created by his mother. The cool kids surface, covered in all the moss, and collapse on the shore.

Steven and Lars attempt to remove it, but it responds by trying to grow on them. Steven says that they need to take it to the top of the mountain, but before he can say any more, Lars shouts that him getting in with the cool kids was ruined by Steven’s weird mom. Steven gets angry at Lars for the first time in the episode, and stops Lars' "The Reason You Suck" Speech with a murderous look, of all things, that frightens Lars visibly. Steven says that his mom saw beauty in everything, even in the moss, and even in "jerks like [him]". Once he finishes shouting this, he asks Lars to carry the moss ridden teens to the car. Once they haul them in and buckle them up, Steven says that Lars needs to drive them to the mountain. Lars claims he cannot drive stick, to which Steven says he’ll handle the stick, and for Lars to focus on driving. After first driving halfway into the pond, Steven figures which one is reverse, and they make their way to the mountain in a similar and chaotic fashion, all the while the moss is growing around the car and on Steven and Lars. They make it to the mountain, stopping twenty feet from the peak. Steven and Lars begin dragging the cool kids to the top, but the moss covers them wholly, just feet from the peak. As they lay, immobile as the moss starts to cover their face, Lars calls out Steven's name. At this point, the audience is led to believe that Lars will apologize. Instead, he has time to exclaim "This sucks!" before the moss covers his face. The bodies stop moving, now mossy shapes of people trying to crawl to the top.

The clouds start to part, and the sun shines down on the the mountain. The moss begins to bloom into hundreds of beautiful flowers inlaid with the gem of Rose and Steven, catch the wind and float into the air. Steven, Lars, and the cool kids are left lying on the ground without moss. Steven and Lars get up first, and Steven exclaims that the moss must have just wanted to go to the mountain to bloom. As the cool kids get up, they wonder how they got there, with Sour Cream wondering if he had just died. Steven says that Lars brought them here, and the cool kids praise him, then begin watching Sour Cream "rave" to the flowers. Steven attempts to give Lars another high five, but Lars shakes his head, instead, he high fives Steven’s chest, and Steven does the same.

This continues until the Iris Out on Lars, where he gets annoyed and tells Steven to stop.