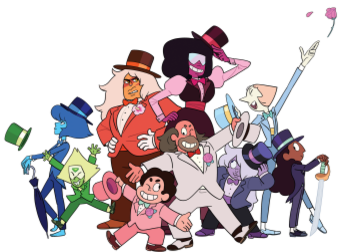 Warning: All spoilers for the first two seasons and some for later seasons are unmarked. It is highly recommended that you watch those episodes before reading these sheets. Proceed at your own risk! 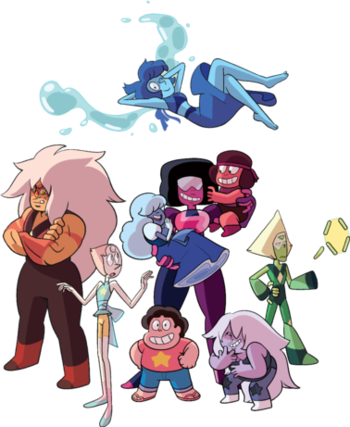 Pearl: Our bodies are just projections generated by our gemstone. Think of it like a hologram, but with mass.
Amethyst: Nice mass.
Garnet: I know.
— "The Classroom Gems", "What are Gems?"

A race of immortal, shape-shifting mineral-based aliens originating from a place only known as the "Gem Homeworld".

All voiced by: Erica Luttrell

Rare aristocratic Gems with ice powers and the ability to see into the future.

All voiced by: Jennifer Paz

Blue Gems with water powers, whose purpose is to terraform planets to be made into Homeworld colonies.

Tall, strong Gems made to serve as soldiers. This group includes Amethysts, Citrines, Jaspers, Carnelians, and Rose Quartzes. Agates are a sub-type of Quartz that hold positions of authority over groups of other types of Quartzes.

All voiced by: Charlyne Yi

Small red Gems with fire powers, created to be the foot soldiers of the Gem armies.

All voiced by: Shelby Rabara

Green Gems made to serve as engineers and technicians. To compensate for the resource crisis, they were made smaller in Era 2.

A Servant Race that works as attendants and handmaidens of higher-ranking Gems. Owning a Pearl is considered a status symbol on Homeworld.