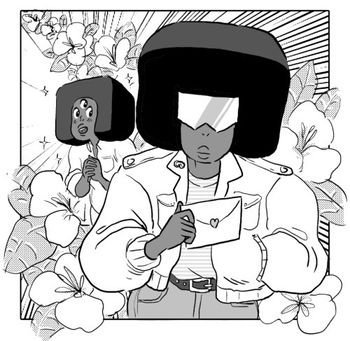 Steven and Connie attempt to take selfies with the ocean on the background, but are interrupted by Jamie the mailman. Jamie informs the two that he's been away in Kansas trying to achieve his dreams of being an actor. But he missed being a mailman, so he came back. Jamie then gives Steven a whole sack of mail that didn't get delivered to Steven while Jamie was gone.

Connie: Wow, it looks like the postal service has been slacking off.
Steven: Jamie's the only mailman who knows where I live.

Garnet walks out of the sea, returning from her search at the bottom of the ocean for Jasper and Lapis. Jamie is instantly smitten. Garnet tells Steven that she didn't have any luck finding either of the two Gems, and after insta-drying herself, she walks off.

Later, Steven and Connie go through all of Steven's packages and find many packages of Sea Pals. Steven tells Connie that when his initial order of Sea Pals didn't arrive, he kept ordering more. After Steven tells Connie he wants to set all the Sea Pals free into the ocean, Jamie comes up to them and, stammering and blushing, delivers a pink envelope sealed with a heart-shaped seal. He runs off before Steven can ask what the envelope is, but Steven and Connie notice the "FOR GARNET" penciled on the front of the envelope.

Steven and Connie run inside the house and read the letter to Garnet. While Steven is reading the letter, the scene flashes to Jamie writing the letter in Shakespearian get-up, with a large white quill, in a room lit by candlelight. After Steven finishes reading the letter, Connie concludes that Jamie is asking Garnet out on a date! Steven then tells Connie that will not be happening, since Garnet is a relationship between Sapphire and Ruby.

Connie then insists that they write a letter in response since Jamie put so much thought into his letter. She has Garnet dictate what she should write, but the resulting letter ends up rather...harsh.

Dearest Jamie,
No.
The end.
Forever.
And even after that.
Yours truly,
Garnet

Connie then concedes that at least it's to the point, and Steven and Connie run off to give the letter to Jamie. They find him sitting and staring out into the ocean, and they sit next to him to try and give him the letter. He then starts describing why he's staring into the ocean before they can say anything. Apparently, Jamie got rejected over and over again as he went from audition to audition in Kansas. He returned back to Beach City because he couldn't bear another rejection. Steven and Connie then decide it would be best not to give the letter to Jamie, since it would just make him more upset.

Back at Steven's house, Connie and Steven write up a nicer letter to let Jamie down easy. Satisfied with what they wrote, they place the letter in the mailbox for Jamie to pick up.

However, that night, Steven is interrupted when playing his video games by Jamie yelling outside the balcony for Garnet. Steven realizes that Jamie completely misinterpreted the letter Steven and Connie wrote and thought it meant that Garnet reciprocated his feelings. Steven tries to correct him, but is interrupted by Jamie when he notices Garnet walking up next to Steven.

Jamie: Ah, Garnet! You've come! You can tell Steven about all the beautiful things you wrote to me in this message!
Garnet: (confused) I didn't write that!

Steven reluctantly admits that he and Connie wrote that letter to let Jamie down gently. When Jamie asks Garnet if this is true, Garnet tells him that she does not and never will want to be in a relationship with him. Jamie runs off in tears.

The next morning, Steven tells Connie he feels awful about Jamie, but Connie reassures that Jamie will bounce back from this and will probably be here soon to deliver mail like he always does. A postwoman with short, blond hair then asks for the location of the home of Steven Universe. Steven runs over to her and tells her that he is the home of Steven Universe. The postwoman tells him that she thought Jamie was joking when he said that this is where Steven lived. When Steven asks where Jamie is, the postwoman tells him that he was too emotionally crushed from having his love spurned to resume his normal route. She chuckles at Jamie's dramatics, gives Steven a coupon book, and tells him to have a nice day.

Garnet then leaps out of the ocean punching a gem monster. After hurling it back, she notices Steven and Connie's sad looks. Steven and Connie tell her that Jamie is crushed and that it's all their fault. Garnet tells the two that she'll talk to Jamie, but the two try to convince her not to since her words will destroy him.

Jamie is sitting on the beach, melodramatically lamenting his rejection (punctuating his speech by hurling a fistful envelopes into the air and watching them flutter into the ocean). Garnet finds Jamie, sits next to him, and tells him she didn't mean to make him so upset. Jamie then asks if she'll go out with him, but Garnet rejects his offer again. Jamie insists that he loves her, but Garnet tells him that Love at First Sight doesn't actually exist, since, to love a person, you have to actually know them, and Jamie doesn't even know who — or what — she is. She then tells him that he's a very convincing actor, since his performance of the lovesick fool convinced Steven and Connie, and convinced himself, too, and advises him to try local theatre.

Garnet leaves, and Steven and Connie sit next to Jamie and ask if he is okay. Jamie tells them that Garnet gave him some pretty solid advice. Steven then asks if all the letters in the water were from him to Garnet, but Jamie says that they were actually the mail he was supposed to deliver on his last round. Steven and Connie offer their help to collect them and Jamie accepts it.