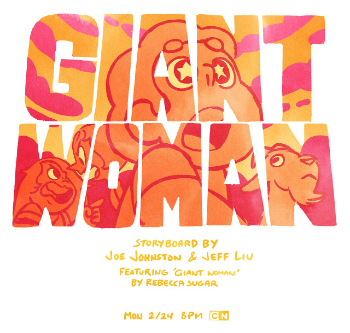 Amethyst and Pearl are playing checkers. After every move, Steven drops a water balloon on the head of the Gem who moved last. Pearl asks Steven if this is really necessary. Steven counters that it makes the moves matter more, but Pearl maintains that in checkers, every move matters, and after a taunt from Amethyst, goes on to win the game. Amethyst doesn't seem to mind losing. In fact, since it means Steven dumps all the remaining water balloons on her, she says "it feels good to lose." Pearl sneers, telling Amethyst she hopes the other Gem doesn't have that attitude about losing when they're on missions or in battle. Amethyst is annoyed by yet another gripe from Pearl and tells her "you're no fun anymore. This is why we never form Opal." Pearl retorts that they don't form Opal because Amethyst is difficult and "a mess." Steven interjects to ask what Opal is.

The two gems describe Opal to him, each in her own way. Amethyst describes her as an "ultra-powerful, stone-cold Betty", claiming that part as being from her, and the "kinda tall" part as coming from Pearl. Pearl goes on to elaborate in a more precise manner (complete with animated sand figures of Amethyst and herself dancing) that Opal is a magical and physical fusion of the two gems into a single being combining traits from both of them. Steven of course is delighted and curious to see the pair of them unite to form Opal. But the two gems refuse, part because they don't get along, and part because Pearl, ever the Control Freak, says doing so is only for when it's absolutely necessary. Further discussion is stopped by the sparkle at the house that means Garnet has returned.

The leader of the Gems says she has found the Heaven and Earth beetles, and indicates the group should split up to retrieve them. Amethyst remarks she doesn't want to go with Pearl, and Pearl reciprocates, but Garnet's command is that Pearl, Amethyst and Steven should go together. Despite their protestations, she has a good and practical reason: the Earth Beetle's home is in molten lava, and Garnet herself is the only one who can swim in it. Amethyst and Pearl bicker some more, but they agree to their mission. Garnet tells Steven to keep the harmony between the contentious pair. Steven promises to do so.

When they arrive at the Heaven Beetle's location, they must climb to the top of a mountain. Steven is impressed for all of two seconds before he resumes questioning the pair about Opal and how they operate in that form. He wheedles and cajoles, urging the two repeatedly to fuse. They encounter a rustling in the bushes that turns out to be a mountain goat. Pearl reiterates they only use Opal when it's a lethal situation. Steven bursts into song about how much he wants to see a giant woman as they continue their path up the mountain. Amethyst and Pearl continue getting on each other's nerves all the way up. Steven continues urging, but they decline every time, even when they come across an obstacle for which the Opal form would be useful — getting across floating stepping stones that might be too far apart for Steven to jump on his own. The mountain goat, however, has no problem, and disappears into the temple.

Pearl voices that concern, and Steven suggests becoming Opal so they can bridge the hazardous crossing for him. Pearl says they can do it without Opal and Amethyst concurs, tossing Steven partway across the stepping stones. He lands safely, but when he and Amethyst begin jumping up and down on the floating rock, Amethyst jumps too hard and Steven falls off. Pearl immediately crosses to them, dives to follow Steven, and Amethyst uses her whip as a bungee around Pearl so they can come back up to safety. Steven compliments them on how well they worked together and asks why they don't do so all the time. They look away uncomfortably without answering.

The rest of the trip to the Heaven Beetle's temple is completed without incident, but the beetle isn't there. Pearl becomes alarmed at the beetle's absence. Amethyst snarkily comments that freaking out will not help; which results in Pearl snarking about Amethyst being useless and having bad posture. This sparks another full blown argument between the two. The mountain goat begins bleating in alarm. Steven breaks up the fight, thinking it's upsetting his new "son", but it turns out what was scaring the goat was a giant black bird with a clacking beak. It grabs the goat in one bite, and Pearl summons her spear. The bird does the same with the spear. Amethyst grabs Steven and runs into shelter nearby. Steven points out that this would really be a perfect occasion for them to fuse into Opal.

The pair finally concede the point and begin their Fusion Dance. Pearl's dance is balletic and precise. Amethyst's is more sexy club kind, which the other Gem just does not get and is frustrated by. As a result, Pearl isn't quite ready when Amethyst dips her and smacks the shorter Gem in the face. Their fusion fails, and another argument ensues about their dancing styles. Steven tearfully begs them to stop and try again; if they don't he might never get to see the awesome fusion power... and also, he might get eaten by a giant bird. Which is exactly what happens.

Inside the bird, Steven discovers the Heaven beetle. A breakthrough from below reveals that the two Gems have finally succeeded in forming Opal. Her attacks shatter the bird into multiple miniatures which flock to attack. She retreats in a series of acrobatic maneuvers to the mountaintop with Steven in one hand, then fights the bird to its destruction, using not only skills from Pearl and Amethyst, but their weapons which also fuse into a single weapon for Opal. Once the bird is defeated, Opal returns to Steven who is now a little frightened that his friends no longer know him in their new form. But Opal sings a few bars of his "Giant Woman" song to reassure him that she does.

Back at the house, they have returned to find Garnet waiting. She asks about the Heaven beetle. Opal realizes she doesn't have it, and the fusion breaks. Pearl of course begins to blame Amethyst, but Steven reveals he has the beetle. Garnet compliments him and reunites the two beetles in a little gem terrarium. She also comments that he got them to fuse. Steven cheerfully remarks that all it took was getting eaten by a giant bird. Unperturbed, Garnet tells him "nice work", and that he'll be great himself at fusing someday.

As Steven excitedly begins to ponder this, the episode ends.