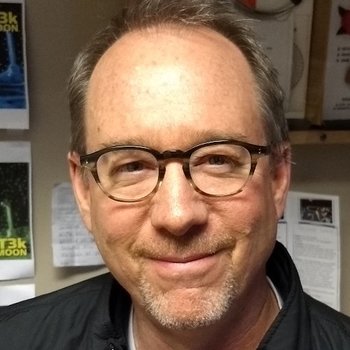 "Sometimes I go into my own little world. It's okay, they know me there."
Advertisement:

Hodgson started out as a prop comic, working comedy clubs and making appearances on Late Night with David Letterman and Saturday Night Live. After meeting Jim Mallon, the production manager of St. Paul's KTMA station, he came up with the concept for MST3K and began going through KTMA's library to find old movies that could be featured and riffed on the show. He was partly inspired by the film Silent Running, which was about a man stranded in space with only robots to keep him company. Hodgson built the robot puppets and set for the show in one night. His subsequent sleepy-eyed appearance in the pilot, which was taped the following day, was incorporated into the show as a permanent aspect of his performance. Hodgson hosted MST3K as the character Joel Robinson from its debut in 1988 until partway through its fifth season in 1993. He left the show due to creative differences with Mallon and handed over the hosting duties to head writer Mike Nelson.

Hodgson's first project after leaving MST3K was an HBO pilot called The TV Wheel that was not picked up. He worked as a writer for Jimmy Kimmel Live! and continued to make occasional TV appearances, including a recurring role on Freaks and Geeks and a return to MST3K in 1999 for the show's tenth season premiere. Later on in his career, he became a voice actor when he began playing Mayor Bill Dewey on Steven Universe.

In 2007, eight years after MST3K ended its run, Hodgson began a new riffing project called Cinematic Titanic alongside MST3K alums Trace Beaulieu, Frank Conniff, Mary Jo Pehl and J. Elvis Weinstein. They toured for a number of years before the project came to an end. Hodgson also reunited with Beaulieu for the short-lived sci-fi comedy Other Space in which they played characters similar to the ones they had portrayed on MST3K. In 2012 he appeared as a guest in the first season of Jerry Seinfeld's web series Comedians in Cars Getting Coffee.

In 2013, Hodgson began hosting a revival of the MSTSK Turkey Day concept on YouTube. Every Thanksgiving, when the show was still running, Comedy Central would air fan-favorite episodes as part of a marathon that fans could watch while eating their Thanksgiving dinner. The return of Turkey Day proved to be a hit with the fanbase and sparked interest in a revival of the show itself. In 2015, Hodgson announced a Kickstarter campaign to do exactly that. The campaign was a huge success and the revival debuted on Netflix in 2017. The show is currently hosted by comedian Jonah Ray with Hodgson serving as executive producer. There have been several MST3K Live tours, one of which featured Hodgson returning to riff alongside Jonah and the Bots and another featured Hodgson without Jonah. In 2019, Hodgson told Kickstarter backers that the show would not be returning to Netflix but promised to explore other options for the future of the series. That would ultimately pay off in 2021, when a second Kickstarter campaign helped to fund a 13th season of the show, this time to be hosted on an online platform known as the Gizmoplex. The 13th season will be split between episodes hosted by Hodgson, Jonah and newcomer Emily Marsh.