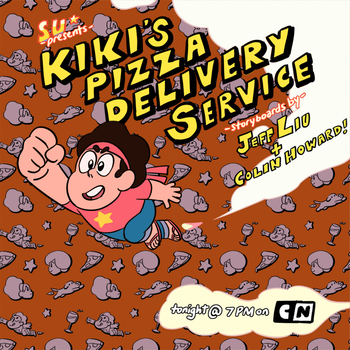 Steven has ordered pizza for dinner and learns that Kiki is doing deliveries. Her sister Jenny blew out the delivery car's tires with Sour Cream's mixtape and took the car to the repair shop, leaving Kiki to deliver on foot. She leaves to make more deliveries.
Advertisement:

Much later, Steven is sleeping and dreams that he's flying around on rocket feet. He sees Kiki below on a giant cheesy pizza lake getting grabbed by a cheese hand and saves her by destroying the hand.

The next day, at Fish Stew Pizza, Steven watches as Jenny (yet again) needs her sister to cover for her at work, to which Kiki says yes. After Jenny drives away, Steven tells Kiki about his dream, and they realize they shared a dream. She is delighted that he interfered and saved her, since being drowned in cheese has been a recurring nightmare for weeks.

Steven agrees to fight for Kiki in her dreams and does so for the next few days, while during the day, Kiki keeps doing favors for Jenny. One day, Steven tells Kiki that they must figure out why she has these nightmares, and the next time Steven enters her dreams will be the last, since he's too exhausted to do this night after night.

In Kiki's dream, the two allow themselves to be buried by cheese, and they traverse a cheese cavern. At the end of the cave, a Jenny made of cheese grabs onto Kiki and asks for favors. At first, Kiki complies, but after Steven points out that she has to say no and her feelings matter, Kiki finally says "no" to cheese Jenny, and Jenny withdraws.

The next morning, Steven looks for Kiki at Fish Stew Pizza and finds Jenny sweeping up. She tells Steven that Kiki had a talk with her about getting some rest, and Jenny happily took over for the day. Steven is delighted to hear that Kiki is on break and falls asleep on the spot.

Iris Out on a sleeping Steven as Jenny looks at him curiously while gently prodding him with the handle of her broom.