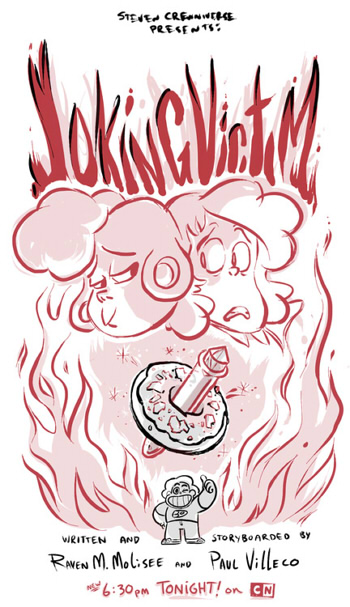 Steven is sitting on a bench next to the Beach City Pier when Amethyst approaches him, suspiciously asking him if he wants to try some of her fries. He enthusiastically agrees and eats some, only to discover they are laced with Fire Salt. Desperate for something to drink, Steven rushes to the Big Donut and causes a huge mess on which Lars slips on. When Sadie tells Lars to clean it up, he complains about hurting his back and earns the day off from an overly worried Sadie. Once he leaves, Sadie remarks on how she will not be able to run the store on her own, and Steven volunteers to help.

Sadie officially dubs Steven "Lars for the day", and shows him a tour of the Big Donut's employee room. She shows him where the extra supplies, napkins (which she sleeps on when she is tired), and donuts, which are shipped in from a baking company. Steven questions why the Big Donut does not make their own donuts, which Sadie answers that they did, but not since the "accident" (the screen then pans over to the other side of the room, showing a burnt outline of what was most likely the old cook). She then shows Steven a (presumably long) training video, starring a younger Mr. Smiley, a former actor/singer. After the video is done, the two get to work. While working, Mr. Smiley comes in and sings along with an enthusiastic Steven to his previous training video, who then makes a remark about Mr. Smiley's "former" career, much to Mr. Smiley's disappointment.

After the day is nearly done, Sadie jokes that the two should call Lars and tell him Steven has replaced him. Excited, Steven agrees, but when he learns it is a joke, he subtly tells Sadie that she should just fire him since he is such a jerk. At first, Sadie starts to agree, but defends him, and says that he is a nice person once you get to know him. She tells Steven that when she and Lars were younger, Lars had wanted a video game, but is banned from the only place in town that sold it. Lars had asked Sadie to wait in the long line to get it for him. Once she had brought the game over to his house, she saw that Lars had gotten her a large box of Oyster crackers (which are Sadie's favorite), in return for the game, and let her be "his player 2." Sadie then remarks that they spent the rest of the night together and that it was sweet of him to let her do so. Steven suggests that they should do something nice for Lars in return.

After work, Steven and Sadie head over to Lars' house with a box of donuts, and much to their surprise, see the Fish Stew Pizza car already parked in front of his house. Steven assumes that Lars had already ordered pizza, but sees that he had invited over Jenny, Buck, and Sour Cream to hang out on his trampoline. Jenny bumps into Lars (much to Sadie's horror) and thanks him for inviting them over, to which Lars bashfully admits that he has the whole day off due to him faking his back injury. Sad and angry, Sadie runs in front of the house and starts to back away once she sees the Pizza car. Steven comforts and reassures Sadie that she does not need him. Angrily sobbing, Sadie remarks that Lars had made a fool of her, and has "burned her" too many times, so just once, she wants to "burn him back." Steven then tells Sadie that he knows how to burn someone, and tells her to go home.

The next day at work, Sadie watches TV while Steven comes in with the Fire Salt that Amethyst had pranked him with, telling Sadie that they should prank Lars with it. At first, Sadie grabs the bottle from Steven and refuses to go with the idea, but after seeing Lars come in and dramatically fake his injury for another day off much to her rage, she angrily puts a large amount of it on a donut. Sadie then approaches Lars and asks him about his back. Lars says that it still hurts, but says that he knows that he can count on Sadie to help, calling her "P2." Sadie tells him to relax and to have the (Fire Salt-covered) donut, warning him that it is hot. As Lars takes a bite out of the donut, Steven laughs at Sadie's pun about the donut being hot, and Lars finally reacts to the Fire Salt. Due to the great amount of Fire Salt on the donut, Lars starts to breathe fire and damages the Big Donut's interior.

Panicking and desperate for something cool, Lars runs out of the store and wreaks havoc among Beach City with his fire breath. Chasing him down, Sadie and Steven put out the fires Lars has started in the city. In the city, the Mayor unveils a large bowl containing "the largest amount of ice cream in beach county," which Lars melts with his flaming breath. Eventually, Lars, Sadie, and Steven head to the pier, where Amethyst is hanging out.

Amethyst asks Steven why "donut guy" (Lars) is breathing fire, to which Steven replies that he put too much Fire Salt on a donut they pranked Lars with. Angry at this discovery, Lars holds down his fire breath and starts to chase Steven. Through the smoke and flames, Sadie then confronts Lars and tells him that it is her who pranked him. She tells him that after everything she's done for him, he still likes to hang out with other people. She says that she thought about the night they played video games, and can't stop thinking of him as a good person since then. Holding Lars' hand, she then starts to say something else, but stops and asks him if calling her "Player 2" "is just another way of saying [she] could've been anyone."

Lars tries to reply but starts to choke on the flaming donut, in which Steven performs the Heimlich maneuver on Lars, which is something he learned in the Big Donut training video (while doing so, he sings the jingle he learned with it when performing the actions). Sadie then puts out the flames on the donut and starts to put out the rest of the fires caused by Lars. As Lars approaches Sadie, she states that she will not apologize to him, but Lars says that he wants to help, and understands if she wants to be alone. Sadie then realizes that Lars does care about her, and tells Lars that he can stay and help, but not before getting him water and a not-burned shirt.

A proud Steven looks on while Amethyst tells him that the two (she and Steven) make a good team, with Steven replying that she did not do anything to help at all. Amethyst shrugs her shoulders as the star zooms onto her face.