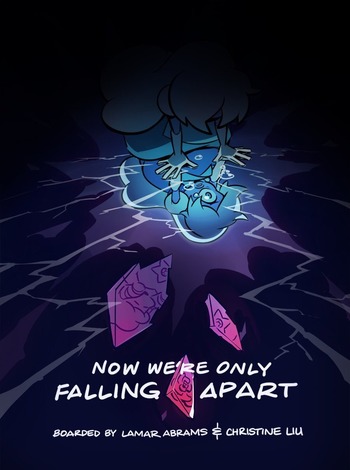 "She lied to us! She lied about EVERYTHING!"
Advertisement:

Immediately after the reveal that Rose Quartz was Pink Diamond all along, Steven and Pearl sit Garnet and Amethyst down to further explain things. While Amethyst is shocked, she keeps her cool and manages to make light jokes about it. On the other hand, Garnet is unable to maintain her stoic composure for long. She starts to shake and suddenly unfuse with Sapphire raging in anger and betrayal while a shocked Ruby tries to calm her down. Sapphire had never questioned Rose because she trusted her and never saw the possibility of Rose ever lying to her or the other Crystal Gems. Sapphire yells at Ruby and says that everything they had worked for, including their relationship, was all a lie, and that they were all made to be fools. In the heat of the argument, Sapphire warps out of the house leaving a devastated Ruby behind.

Steven and Pearl follow Sapphire to Rose's fountain, where she laments being used for Rose's plans and torturing her and all of her fallen Crystal Gem comrades all this time. Pearl helps Sapphire get over her anger at Rose for deceiving the Crystal Gems by explaining exactly how they came to be.

Way back when Pink Diamond had just got her wish for a colony of her own, she fairly quickly found out that it wasn't all it was cracked up to be. Diamonds spend the entirety of the invasion in their moonbase, overseeing other gems with only their pearls for company. Pink found this incredibly boring, and Pearl's sycophantic nature frustrating (and certainly not helpful), even though Pearl was made to make Pink Diamond happy despite her never knowing how. When Earth's first Quartz soldiers began to emerge, Pink wanted to go down from her base and greet them, but was unable since a Diamond intermingling with lower gems was frowned upon. Pearl got an idea about how to solve the problem. Since Gems can shapeshift, and if Pink Diamond were to disguise herself as a Quartz, she could freely greet and play with the Quartz gems being born down on the colony. Pink thought this was a great idea, and quickly created a Gemsona to cosplay- Rose Quartz.

Pink was happy to experience her colony firsthand, but this quickly faded as she began to explore the rest of Earth and its natural beauties. Pink soon realized that after Earth was colonized, all of its natural life would be destroyed. Sapphire wonders why Pink didn't end the colony on her own. Pearl explains that she tried, but failed. She desperately tried to stop the colony from being completed using her authority as a Diamond... but it turned out, she didn't have any. The instant she decided to stop doing things the traditional way, Blue and Yellow came down on her like a ton of bricks. No amount of wheedling, excuse-making, or outright begging would move them to grant her anything more than saving just a bit of Earth's life, in a zoo.

So Pink decided that if she wasn't going to be able to make any headway as herself, she'd start objecting as someone else, who the Diamonds would have to listen to. She embraced her Rose Quartz persona as a fearsome renegade gem and she and Pearl formed the 'Crystal Gems', a rebellion group who wished to drive the Diamonds, and every other gem, away from Earth forever. But that objective changed completely after she witnessed Ruby and Sapphire's first fusion into Garnet during an early rebellion attack. Garnet's creation distracted Blue Diamond's court and gave her an opportunity to escape, but it also gave her something more to ponder.

Rose found herself completely amazed something like a fusion between two different gems was even possible. She was even further surprised when Pearl tried to fuse with her. Pearl admits that she started having non-traditional thoughts of her own, about living with Rose and making her happy even if she wasn't her Pearl. In that moment, Rose and Pearl nearly fuse themselves before being startled by Garnet falling down from the cliff. With Garnet, Pink Diamond found a new purpose for the Crystal Gems; aiding the various Off-Colors who otherwise would be shattered just for being what they were and giving them a home on Earth. With Garnet as the first real member, the Crystal Gems became a true revolutionary army, and Rose Quartz's rebellion grew into a war.

Back in the present, Sapphire realized Rose Quartz, Pink Diamond, was following her and Ruby the whole time as Garnet, and their fusion made her the figure they grew to respect and trust through all the millennia. She then suddenly realized that she had left Ruby devastated back at the beach house and quickly warps back to apologize, only to find a handwritten note to her written by Ruby.