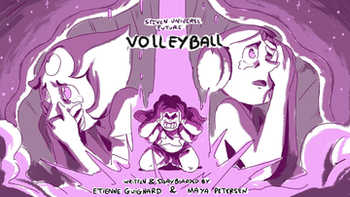 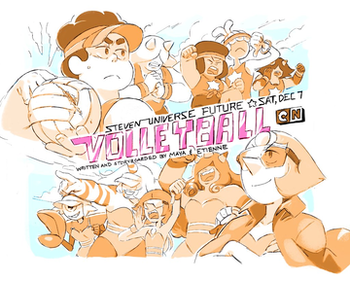 The episode begins with Steven healing the cracked gem of one of Nanefua's Ruby guards and then doing the same to a group of Quartzes. Once the Quartz gems leave to go play volleyball, Pink Pearl shows up, thinking Steven might be able to heal her cracked eye. Steven tries to use his spit on her gem, but is confused when it has no effect. He then tries to put the spit on her eye, but to no avail. Steven then asks about what happened while Pink Pearl was under White Diamond's control, but she says she doesn't remember anything and that she got this scar before White Diamond controlled her. Steven automatically assumes White Diamond was the one who scarred Pink Pearl. When she states Pink Diamond was the one who gave her the scar, Steven tenses up at the mention of his mom and briefly turns into his pink form. Steven is determined to help fix Pink Pearl's scar, and leads her out of the house so they can find Pearl.

They find that Pearl is the referee of the volleyball game between the group of Quartzes. Steven asks Pearl if she can help Pink Pearl, to which she agrees. Steven struggles introducing the Pearls to each other due to them having similar names, and suggests a nickname for Pink Pearl. Pink Pearl states that Pink Diamond used to give her nicknames all the time, and starts to reminisce about her. When a volleyball hits Steven's face, he decides to give Pink Pearl the nickname of "Volleyball".Pearl tells Steven that whenever a Pearl was damaged, they were taken to be fixed at The Reef. Steven agrees to go there and Pearl warps the two of them to The Reef, a clam shell-shaped dome. They are greeted by an A.I. named Shell and explore the customization options for Pearls. Pearl smirks at the many weapons and tools and asks Pink Pearl if she can believe this. Pink Pearl then shows Pearl a ribbon wand that Pink Diamond gave to her. When Pink Pearl asks Pearl what Pink Diamond gave her, Pearl walks away, jealous. Once they enter the center of The Reef, Pink Pearl stands on a circle to be healed by Shell.

Pearl begins to argue with Pink Pearl, claiming that Pink Diamond was nothing like the way she described her. As they continue to argue, Steven tenses up and turns pink again, saying that he doesn’t want to hear another bad thing that his mom did before inadvertently destroying most of the room. Shell then concludes the two Pearls are defective in response to their behavior and attempts to rejuvenate them. Pearl and Pink Pearl bond over their shared emotional pain from Pink Diamond's actions and fuse to form Mega Pearl. Mega Pearl and Steven escape The Reef before Shell can rejuvenate them.

The episode ends with Mega Pearl standing next to Steven on the beach. Both Pearls come to a better understanding for their Diamond before they unfuse and stare at the night sky.

Pearl is more experienced than Volleyball is, but the latter reminds the former that she's actually the older of the two.

Pearl is more experienced than Volleyball is, but the latter reminds the former that she's actually the older of the two.