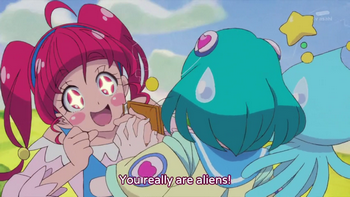 Friendship at First Contact.
"There exists, in all of us, a deep-seated fascination for the unknown. An adventurous spirit that rejects the familiar and glories in the unfamiliar, whatever - or whomever - it may be."
— Xenophile Ethos blurb, Stellaris
Advertisement:

Xenophile: a person who likes foreigners or things foreign [from Greek, from xeno- + -phile]. And by foreigners, we mean aliens. And not just humans who live in another country, either.

Aliens can be Intrigued by Humanity or a Fantastic Anthropologist, but what about the inverse — when a human character is obsessed with everything alien? This is often an evolved Naïve Newcomer character in Speculative Fiction and serves the same function in being a go-between and (sometimes literal) translator between a strange alien culture and the reader/viewer. Unlike a Naïve Newcomer, however, the Xenophile doesn't need another character to tell them about the alien culture we meet — they can provide all (or at least, most) of the exposition themselves, cheerfully and enthusiastically! In fact, they're so enthusiastic they probably have neglected their relationships with their fellow humans. In addition to appearing in Science Fiction, this trope can also appear in Fantasy literature where a human character is enthusiastic about non-human races and cultures.

Note: This is not about a character who is attracted to aliens in another way... there's a different trope for that, although the two can easily be combined. Contrast Aliens Are Bastards. Also contrast Absolute Xenophobe. Again, aliens-liking-human-culture examples are a different trope and belong in Intrigued by Humanity or Fantastic Anthropologist. Compare Nightmare Fetishist; if the aliens are weird enough, both can apply to the same character. Compare Admiring the Abomination, where a character (often The Smart Guy) reacts to an alien threat with both excitement and fear.