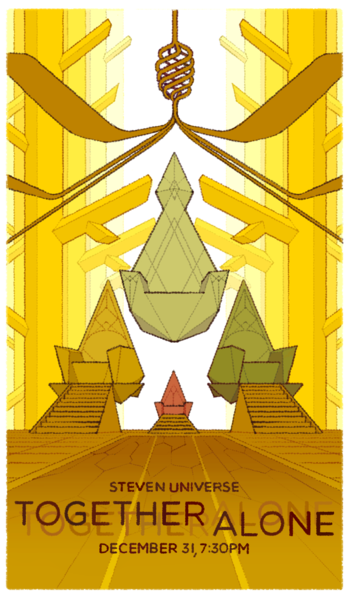 Steven dreams a memory of Pink Diamond juggling in her rooms for the amusement of White Pearl, who is coloured pink, has two eyes and acts more normally. When Yellow Diamond looks in, the two quickly pretend to have a "proper" mistress-servant relationship, but laugh after she's gone. Then Steven, who's been playing Pink's role, starts throwing up locks of Rose's hair, and things quickly go downhill before Steven wakes up in Pink Diamond's room. On request, the Pebbles have been constructing furniture all night that somewhat resembles the layout of Steven's house.

With Pearl to guide him, Steven goes to the throne room and asks permission from Yellow and Blue to throw a ball. They agree, since it's possible that White could show up, and this could also mark the beginning of Era 3. Yellow and Blue Pearl are lent to Steven to help with the preparations, especially since "Pink" apparently can't remember Homeworld customs. Steven thinks balloons and confetti cannons would be great, but Yellow Pearl informs him otherwise: the ball is going to be a very dry affair, according to tradition, where Steven is expected to just sit on a throne, accept the greetings of Pink's subjects, and not do any dancing. Talking to the Pearls, Steven figures out that Yellow Pearl apparently has no concept of fun, but Blue Pearl likes to draw. A drawing she did of Yellow Pearl leads Steven to deduce that she likes to model, but the conversation ends when Blue Diamond arrives. She's incredulous that Steven wants Amethyst, Garnet and Connie to be there, especially Garnet, stating that Ruby and Sapphire, if they go, will be expected to attend separately. Amethyst will have to wear limb enhancers to meet height requirements. Connie can go, but as "Pink Diamond's pet", something both she and Steven aren't thrilled about. Garnet says she just won't go, and reminds Steven that the ball is the only way they know to get White Diamond's attention for a proper discussion.

At the ball, Steven, as Pink Diamond, gets treated to some utterly rote greetings from multiple Jades as Pearl assures him he's doing great. Amethyst arrives, flippant as ever, and Steven gets down to greet her. While wondering how Peridot ever got around in limb enhancers, she shows Steven that she's managed to figure out how to pick her nose with them, before heading off to join the other Quartzes. Steven, Connie and Pearl are surprised to see that Ruby and Sapphire have unfused and chosen to show up, blending in with the other Rubies and Sapphires. Blue and Yellow Diamond make their grand entrances, announced by their Pearls. But when White Pearl follows, she announces that White Diamond will not be attending, before moving to White's throne and announcing that she will be observing for her Diamond.

Connie eventually suggests to Steven that they dance, since White Diamond didn't come and there's no one to stop them. But when the two get onto the dance floor, White Pearl, watching from on high, frowns. Then Steven and Connie fuse while dancing, leading to Stevonnie having an Oh, Crap! moment when Yellow and Blue get furious, believing that "Pink" has come back from "her" long absence worse than ever. Garnet re-fuses to protect Steven, and she's joined by Opal and a pair of Homeworld Jades, standing in Stevonnie's defence. Yellow just poofs all three fusions before grabbing Stevonnie and throwing them in a dungeon, demanding that "Pink" think about what "she's" done.