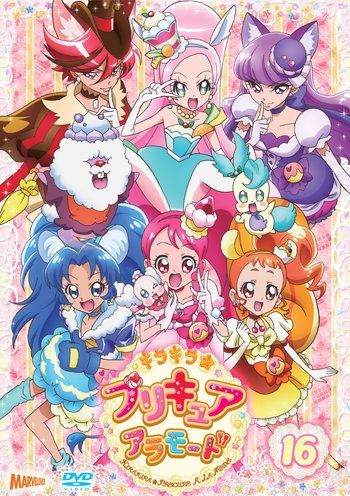 Kirakira☆Pretty Cure a la Mode is the fourteenth entry and twelfth separate continuity in the Pretty Cure franchise. It began airing on February 5, 2017, preceded by Maho Girls Pretty Cure! and followed by HuGtto! Pretty Cure.

Ichika Usami's mother Satomi is coming home from abroad. To celebrate, Ichika decides to make a shortcake to give to her mom. Several failed attempts later, and a plump fairy named Pekorin crashes into her kitchen. Although unsuccessful, the shortcakes made by Ichika are filled with her heart, and a strange energy called "kirakiraru" inside the sweets spills out, which Pekorin happily eats. Unfortunately, a bad fairy named Gummy appears not long after: He was attracted by the kirakiraru, just like Pekorin. Gummy steals all the kirakiraru from the cakes, making them all black. Through her desire to protect the sweets, Ichika gains the power to transform into a Legendary Patissier: Pretty Cure.

Soon after, Ichika makes some new friends who also have an interest in sweets, and together they make a full team of Cures:

Together, the initially five run a sweets shop called the KIRAKIRA Patisserie, while protecting their sweets from other Kirakiraru Thieves like Gummy, as well as any other evil forces seeking the kirakiraru. Midway through the series, the Cures are joined by a shapeshifting fairy named Kirarin who becomes Cure Parfait.

On August 24th, 2020, Crunchyroll announced that they are streaming the entire series on their website with English subtitles, making this the third Pretty Cure season to do so.

Example of:
Ride the Rainbow