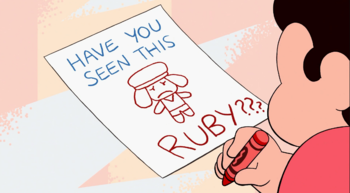 After Steven, Pearl, and Sapphire return from Rose's fountain, Sapphire finds a letter from Ruby explaining that she's leaving. Steven, Pearl and Sapphire ask Amethyst if she knows where Ruby went, but she hasn't seen her since supplying the pen and paper to write the note. Sapphire breaks down in guilt while Pearl attempts to console her. Steven goes off to find Ruby and Amethyst follows.

Steven and Amethyst unsuccessfully search the ocean for Ruby. Amethyst jokes about how Ruby could have made herself small and hidden inside a shell. The two later are seen passing around flyers asking if anyone has seen Ruby. Amethyst takes Steven to a bunch of fun places, but he is only focused on finding Ruby.Amethyst convinces Steven to join her for a pizza with everything on it, where she convinces Steven to talk about how he feels about learning about Pink Diamond. Steven recounts how he is confused about everything that's happened, but not surprised that Rose Quartz lied about it. He also recounts how he's glad that she didn't shatter anyone, but is still confused about how to feel about it. Jenny Pizza shows up and tells Kiki about how Greg is up on Brooding Hill with someone who's crying so hard that they look red, making the two realize Ruby is with Greg.

Steven then asks Amethyst about how she feels in all this, and she dodges the question and attempts to flee. Amethyst turns into a helicopter and attempts to fly away, but Steven uses his gravity powers to catch her and repeatedly asks how she feels. Amethyst attempts to shake him off, and he ends up making his way inside her helicopter's pilot seat. She then tells Steven to get out of her head, to which he asks if he's getting too personal. Amethyst responds by mentioning that he's literally inside her head. Steven then tells her to look out, and she looks up just in time to see the Beach City water tower. They crash into the water tower but don't damage it.

Amethyst and Steven then crash on the beach, where Steven realizes that she's been trying to cheer him up. Amethyst then unloads on Steven, telling him in no uncertain terms that she refuses to unload millennia of her problems onto Steven while he is already dealing with his own feelings and everyone else's, and that no matter what happens, she will not fall apart on him like Pearl, Sapphire, and Ruby did. Processing this, Steven tells Amethyst that this reaction makes her the most mature Crystal Gem, which leaves the two of them in stitches. Amethyst then asks Steven if he still wants to search for Ruby, to which Steven says yes. The episode ends showing them on their way to Brooding Hill to meet up with Ruby and Greg.