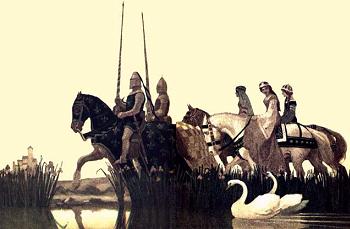 Escort duty is one
Advertisement:

This is the set of tropes that cluster around Knight Templar: the forces of light in hardcore mode, excessively or otherwise. This mentality is all the way over on the Idealistic side of the Sliding Scale of Idealism Versus Cynicism — but it has nothing in common with modern idealism of the Granola Girl and Cloud Cuckoo Lander variety.

The Trope Codifiers are the Chivalric Romances of the medieval Matters of Britain (Arthurian Legend) and of France (Charlemagne) — especially the innumberable fantasy novels and verse epics of the 15th through 17th centuries which were based on, set in, or vaguely inspired by

the older Carolingian myths. The Arthurian myths have a less militantly idealistic style than the Carolingian ones; the Arthurian work most completely of this style is Sir Gawain and the Green Knight.

This pattern is rarer outside of Europe (and before the Middle Ages) than within it. The closest analogue to European chivalry was bushido, the code of the Japanese samurai, but the Japanese code emphasized loyalty to one's lord, even to the point of doing evil, while the European one emphasized loyalty to one's conscience, even to the point of treachery.

See also Hero Tropes, to an extent. A particular variety of Idealism Tropes. A civilization that embraces this is a variety of Martyrdom Culture.