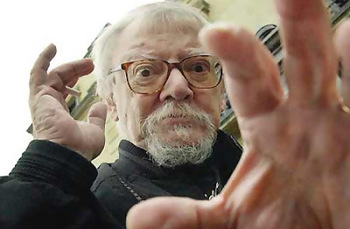 Jesús Franco, also known as Jess Franco (12 May 1930 – 2 April 2013) was a Spanish director, writer, editor, actor and jazz musician famous for directed more than 200 films from 1957 to his death on 2013. His films are popular for mixing spy genre with sexploitation and horror, and the Vatican once named Jess Franco and Luis Buñuel as the most dangerous filmmakers in the world.

Franco was a Surrealist No Budget wunderkind living during the Nationalist rule of Spain by Generalissimo Franco. This led him to make heavily censored government propaganda films early in his career for commercial gain. But he soon grew critical and unfavorable toward Franco's regime and so he made films across Europe helping to popularize such diverse Exploitation genres. His films also became popular in arthouses, porn theaters, ghetto Grindhouse, drive-in's and eventually Mom & Pop home video stores. As a premiere cult director, he has a hardcore fanbase of cinephiles who suspect he has big admirers in Hollywood style directors of the 60s, 70s, 80s and 90s. Franco started his independent career as Assistant/2nd Unit Director for Orson Welles.

Works by Jess Franco with pages on TV Tropes include:

Tropes applying to Franco and his films: