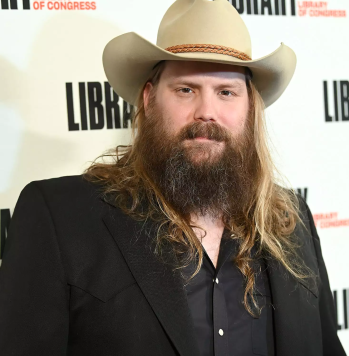 A Country Music singer who emerged in The New '10s as a popular purveyor of "neo-traditional" country music, Christopher Alvin Stapleton (born April 15, 1978 in Lexington, Kentucky) made his debut at the Turn of the Millennium as a popular songwriter, having penned #1 hits for Josh Turner, Kenny Chesney, Darius Rucker, Thomas Rhett, and Luke Bryan. He then fronted the bluegrass group The Steeldrivers for a short time, then an even shorter gig in the Southern rock band The Jompson Brothers, before making his mark as a solo singer. After a false start with "What Are You Listening To" in 2013, Stapleton recorded Traveller in 2015. While the lead single and title track flopped, he got a sudden boost in popularity with the hits "Nobody to Blame" and "Parachute". A cover of "Tennessee Whiskey" was also immensely popular from the album, becoming his highest-charting entry despite never being shipped as a single — this was due to him performing the song with Justin Timberlake on that year's CMA Awards, helping greatly in boosting his profile.
Advertisement:

This was followed in 2017 by a pair of albums: From A Room: Volume 1 and Volume 2. The former includes the singles "Either Way" and his first #1 airplay hit, "Broken Halos".

Stapleton is known for his minimalistic traditional sound, leading to favorable comparisons to the "outlaw country" movement of The '70s, with critics also noting his soulful blues and R&B-styled phrasings.