Give Away the Bride 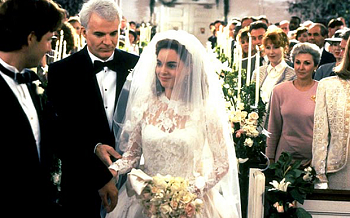 She's your problem now.
Dick: [explaining Earth weddings] The ceremony begins with the bride being given away.
Sally: Excuse me? Given away? Like an object? As in, "free girl with every large fries"?
Tommy: Hey, there are free girls? Can I go?
Harry: Fries? Can I go?
— 3rd Rock from the Sun
Advertisement:

In Western weddings, the bride's father walks her down the aisle to the altar where the vows are exchanged, a holdover from the days of Arranged Marriage where he would formally offer her to the groom. Nowadays, it's a show of endearment towards the most important man in her life before the groom came into the picture, and Daddy is "giving away" his little girl. If her father is dead, unavailable, or didn't fill that role in her life, then she might have her mother, brother, uncle, close friend, or mentor figure stand in his place. It could also be her son if the bride is older.

Because this is a ubiquitous part of Western weddings, only list examples where something notable happens between the bride and her father before or during the walk, or if someone other than her father does the honor, or even examples where the groom is given away!