Literature / Tales of the Otori 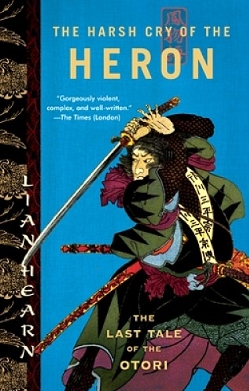 The wind stirred the ancient cedars; the night insects kept up their insistent music. It would always be like this, I thought, summer after summer, winter after winter, the moon sinking towards the hills, giving the night back to the stars, and they, in an hour or two, surrendering it to the brightness of the sun, which would pass above the mountains, pulling the shadows of the cedars after it, until it descended again below the rim of the hills. So the world went, and humankind lived on it as best they could, between the darkness and the light.
Advertisement:

Set in a fictional version of feudal Japan, The Tales of the Otori series tells the story of a pair of Japanese teenagers who become ensnared in a secret war between two powerful warrior clans, the Otori and the Tohan. It is told from the perspective of Takeo, a young man in whose veins flow the blood of two profoundly different groups: the pacifistic Japanese Christian sect known as the Hidden, and the Tribe, a secret network of supernatural assassins. After his village is massacred by Iida Sadamu, leader of the dominant Tohan clan, Takeo is adopted by the disgraced warrior Otori Shigeru, who wishes to use Takeo's awakening supernatural abilities to overthrow the Tohan. But before he can accomplish this goal, he must first come to terms with his own identity as both a pacifist and an assassin. The other principal viewpoint character is Shirakawa Kaede, whom Hearn describes as her "tribute to all the women who are nameless in Japanese history, who figure in samurai family trees simply as onna (woman)." A young heiress held hostage to ensure her father's loyalty to the Tohan, Kaede is soon caught up in Shigeru's plot against Iida.

Other important characters include:

The series is written by Australian author Lian Hearn. It consists of three books which account Takeo and Kaede's role in the downfall of Iida Samamu and its aftermath, as well as a sequel set 14 years after the original trilogy, and prequel set 18 years before. They are, in order of publication:

A film adaption of Across the Nightingale Floor is being planned, and Lian Hearn has confirmed that a script is in progress, being written by David Henry Hwang

Alternative Title(s): Across The Nightingale Floor