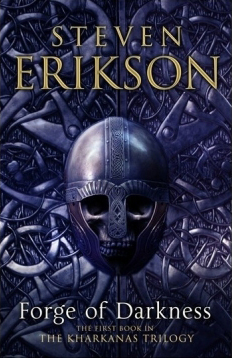 … so you have found me and would know the tale. When a poet speaks of truth to another poet, what hope has truth? Let me ask this, then. Does one find memory in invention? Or will you find invention in memory? Which bows in servitude before the other? Will the measure of greatness be weighed solely in the details?
— Gallan
Advertisement:

The Kharkanas Trilogy by Canadian author Steven Erikson serves as a Prequel to The Malazan Book of the Fallen. It is set millennia before the main series and deals with the Tiste people and the events surrounding the sundering of their home realm of Kurald Galain.

It is a conflicted time in the city-state of Kurald Galain. A costly war has just been won and while the realm's inhabitants are recuperating, Mother Dark has surrounded herself by eternal Night in the centre of her capital city of Kharkanas. Voices can be heard demanding that she clasp the hand of Vatha Urusander — the commoner's great war hero — in marriage to seal the hard-won peace, but her Consort Lord Draconus stands in the way — and he's an upstart noble at that.

On the edge of the lands of Kurald Galain, at the Plain of Glimmer Fate, the dead Vitr sea is stirring, coughing up ancient powers nobody can make sense of.

And beyond the Bareth Solitude, in the lands of the mysterious Azathanai, a bargain has been struck and a murder commited, both of which will have far reaching repercussions.

Rumors of civil war rear their ugly heads and Mother Dark's chosen sons — Anomander, Andarist and Silchas Ruin of the Purake Hold — find themselves caught in the middle. But Andarist is about to be married, and Anomander has commissioned a reknown Azathanai mason with the hearthstone of Andarist's new estate...

The Kharkanas Trilogy provides examples of: