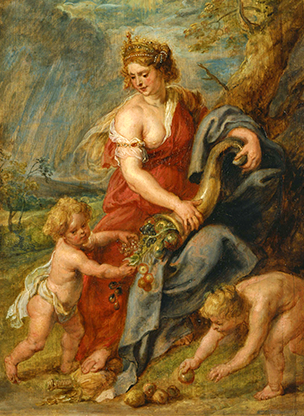 Abundance, 1630
Like the Empress in the Tarot pack, a hearty, smiling lady who is invariably portrayed as heavily pregnant and holding a brimming cornucopia, or nursing a baby, while children play at her feet. She is almost always of ample and attractive proportions and will be generous and bountiful in her affections; she can make green things grow and flourish, and who want to share that love and bounty in one way or another—food being a particularly popular one. They want to love and support and nurture others and generally be motherly. She is both fertile and fecund, but she can get a little cranky if she is not appreciated the way she wants to be. Scorned, she can be lethal — God help you if you get between her and one of her babies.
Advertisement:

A goddess of the earth/nature/fertility/motherhood is more often than not an example of this trope. If an Earth Mother is afflicted, she can shade into the Jewish Mother or the My Beloved Smother. And bear in mind the flipside of Brawn Hilda is a vengeful Valkyrie with a very big spear. Compare and contrast Apron Matron.