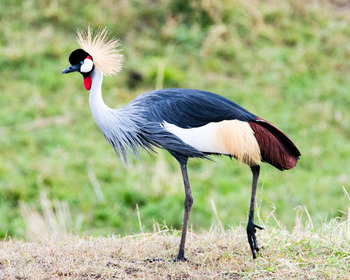 During the collapse of the Mali empire in Western Africa, a city-state called Gao broke free from imperial authority. It went on to become the largest and most powerful of the Sahelian empires. The ruling class was composed of a group of people who spoke similar languages now classified as Songhai. The founder of the empire was the famed warrior and sorcerer Sonni Ali Ber. Following the very brief reign of his son Sonni Baru, the Sonni dynasty was succeeded by the Askia dynasty founded by general Askia Mohammed. Askia Mohammed I was one of the greatest statesmen in the history of the Sahel and brought about the golden age of Songhai. Though a devout Muslim himself, he was believed by the Songhai peoples to have been the son of a river spirit and a sorceress.

Owning to the cosmopolitan nature of the Songhai empire and the open grassland lending itself to rapid migrations, the traditional religion of the Songhai is highly syncretic. There exists no well defined boundary between animism, polytheism, Islam, ancestor worship, and sorcery. With each wave of migration (Pygmies, Voltaic farmers, Songhai people, Berbers/Arabs, Mande, Hausa, Frenchmen) new deities were added to the pantheon.

The Songhai universe is composed of the earth ("Ganda" or bottom) and the sky ("Bene" or top). The earth is a disc divided into the bush and inhabited land. All bushes are connected by rivers. Like many sub-saharan African cultures the bush-village dichotomy represents the divide between the civilized & familiar world of the village compared to the chaos & danger of the wilderness. The heavens are split into 7 layers. The creator God dwells in the highest heaven. Most call him Allah or "Irikoy" meaning Our Master. In the 6th heaven lives Ndebi the messenger of God or demiurge, in different regions it is the thunder god Dongo who occupies this place. The 5th heaven is occupied by Abrahamic angels. In the 1st heaven there are the Holle who are the most active deities in the affairs of humans.