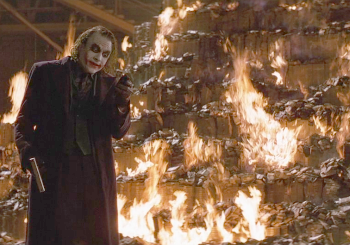 "It's not about the money. It's about sending a message. Everything burns."
"There was this boy I sent to the electric chair at Huntsville here awhile back, my arrest and my testimony. He killed a 14 year-old girl. Papers said it was a crime of passion but he told me there wasn't any passion to it. Told me that he'd been plannin' to kill somebody for about as long as he could remember. Said that if they turned him out, he'd do it again. Said he knew he was going to hell, be there in about fifteen minutes. I don't know what to make of that."
— Sheriff Ed Tom Bell, No Country for Old Men
Advertisement:

Most people have logical motivations for their actions, so by extension most villains have logical motivations for (morally) reprehensible actions and intentions. Ambition, zeal, greed, pride, envy, lust, wrath, fear, love, hatred, bigotry, revenge, misery, jealousy, resentment, selfishness, anguish, misanthropy, good intentions, a troubled childhood, the desire for utopia, fame, and other warped "ideals" can all drive people to evil in ways that we understand and may be familiar with. If a villain's motivations can just be understood, they can be reasoned with — sometimes.

On the other hand, some villains cannot be reasoned with because there is nothing reasonable about their reasons for acting... well, evil. Unlike the amoral motivation we call It Amused Me, which may lead to evil in the pursuit of (attachment-free) amusement, someone whose motivation is For The Evulz knows and cares about the morality of their actions — insofar as they deliberately choose to do evil, and delight in doing so. To them, evil is not a bad means to a good end or even a bad means to a justifiable end; to them, evil is the means and the end, their motivation, and their justification. In short, it's saying "I did this evil thing because it was an evil thing to do."

The name of the trope comes from a portmanteau of "evil" and the Internet phrase "for the lulz."

This may be because Evil Feels Good while Good Is Boring and Dumb, but The Evulz is different from It Amused Me in that the Evulz-seeker need not find any pleasure in their evil acts — in some cases, they themselves (also) suffer as a consequence of the crapsack world they inflict upon themselves and others. In other words, while many villains who follow this trope enjoy what they're doing, their actions also possess an underlying sense of indifference. Note that self-centered and immoral types merely seeking amusement wouldn't bother doing something bad if it harmed them too.

What keeps a villain going in the name of The Evulz (and The Evulz alone) is not strength of character, however, but rather a complete lack of motivation. The quintessential For the Evulz villain's suicidal bravery actually stems from their nonexistent sense of self (beyond 'I love doing and being evil for no reason') and, by extension, lack of a self-preservation instinct. They probably don't actively want to die or be tortured, but they really don't (and psychologically can't) care about it either.

A non-comedic character whose personality is defined by this trope can be a Complete Monster, the Complete Monster being defined as, well, completely monstrous — needing no justifications for doing evil and having no humanizing or sympathetic elements (e.g., good intent or self-doubt) whatsoever. Note, however, that the reverse is not true — the Monster, after all, is a character defined by their boundless heinousness, not by having reasonless evil as their only possible motivation; some may be Pragmatic Evil types who want to Take Over the World. Other villainous personality types associated with For The Evulz include the Psycho for Hire (who is very likely to be Ax-Crazy), the Straw Nihilist, The Sociopath, the more extreme and hedonistic kinds of sadist, and variants of the Chaotic Evil character alignment. A Magnificent Bastard, in the other hand will always avoid this since they will never commit heinous acts for the sake of, no matter how monstrous they are.

That said, Chaotic Evil is not the same thing as For The Evulz. Chaotic Evil is a likely Character Alignment for someone with this as their motivation, since irrationality and acting chaotically often go hand in hand, but Chaotic Evil encompasses anyone else who is clearly more evil than good and more chaotic than not. This means that, realistically, even if someone is Chaotic Evil, they still can and likely do have more logical motivations than For The Evulz. Furthermore, it's possible to be Neutral Evil or even Lawful Evil and be in it For The Evulz.

Of course, Tropes Are Tools without fail. Poor writing of this trope can lead to Stupid Evil territory when villains do petty things or even dumb things that lead to their own downfall.note though it can also be used to deconstruct this, as it's a great way to show off just how asinine, pointless, and childish blind cruelty and petty displays of dominance really are Laziness in regards to this motivation can also lead to writing a Generic Doomsday Villain, since some writers tend not to put any characterization behind the motive to make it believable.

Some variants of For the Evulz characters, such as the Straw Nihilist and most notably The Joker, compensate for this character flaw using philosophy; they question and challenge the heroes' concept of justice, order, reason, and the workings of the world, especially when it's a Crapsack World where those who do evil without any reason whatsoever can get away with it. These people are very likely to give a Breaking Speech that deconstructs the other characters' assumption that there should be a logical, beneficial, realistic reason behind every behavior.

Video Game Cruelty Potential is when the player of a game is allowed or even encouraged to do things For The Evulz. If a whole race has a motive like this, it's Always Chaotic Evil (but Always Chaotic Evil can have other flavors of shared evil). Compare It Amused Me, for (comedically) callous or amoral seekers of amusement, If You're So Evil, Eat This Kitten! for the demand of evil acts as proof of evil, and Trolls.

Compare Made of Evil, which is a character which also does evil for the sake of it, but do so because they are actually an Anthropomorphic Personification of evil. A villain who is self-aware enough to boast that their acts are just for the sake of evil is a Card-Carrying Villain. See also Dystopia Justifies the Means, when a character strives to create a perpetual dystopic world simply for the sake of suffering. Compare and contrast villains with Blue-and-Orange Morality, who do have underlying motivations beyond a mere desire for death and destruction, but not ones most people would understand. May overlap with Bad is Good and Good is Bad.

Sister Trope to Threw My Bike on the Roof. The Evil Counterpart to For Great Justice.

Alternative Title(s): Motiveless Malignity, Did It For The Evulz, For The Evil, For Great Evil, Evil Is Fun, For Teh Evulz